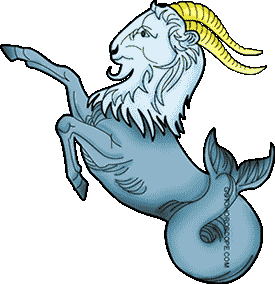 🌟Keep your eyes peeled for career and social situations that appeal to you—key phrase being “appeal to you.” Although you are very thoughtful about others’ feelings, this is a “me, me, me” thing. The full moon sheds light on the benefits and drawbacks of a professional or family arrangement. When the dust settles, you should have some interesting choices to mull over regarding what suits and what doesn’t.🌟

🔭 This week's Planetary Aspects for Capricorn

February 22, 2021 - Venus in your 2nd House of Self-Worth and Money semi sextile Pluto

February 25, 2021 - Sun in your 3rd House of Communication sextile Uranus

February 26, 2021 - Jupiter in your 2nd House of Self-Worth and Money trine True Node

1927 ARC soccer team forms in Alphen on the Rhine

Pratz 2016-08-17 01:17:53
+8
That is the 3rd time you're posting the exact same weekly horoscope. Iv seen it at least twice in the past.
Pratz 2016-07-11 07:18:48
0
Yourl have given this exact same horoscope before! I clearly remember this horoscope from last year when i was going through a bad time & it seemed so true.....that is why i remember it so clearly! I don't know why you guys are repeating the same thing.
Donna DeLuca 2018-08-06 19:08:33
+1
They may repeat because many of these services generate computer modular astrological information and plug it in as needed. Hence the "absolutely free" part....
ss lv sk 2016-04-16 09:43:37
+5
I am capri. Its good sign. We are sincere in matters of love and kind hearted. May be getting angry quickly is not good and have to control a bit before hurting someone. I dont mind to much on money bt matters is all abt love. A true love who wont ditch and go away. My virgo man did tht and badly hurt. Evn i dont want to go to him. Bt i am not able to frgt him. He has so many gf,cheated me, asked me money and i hav always supported him. Bt he doesnt even care to text me. I am so hurt and weep for every single day. Till nw i check horoscope just to check wts going on in his life. I am emotionally connected to him. For me love is nothing bt a fairy tale which will never come true.
cappy 2015-10-13 23:23:53
0
Where is this weeks horoscopes.
christina 2015-10-12 15:26:40
+3
Where is Capricorn weekly horoscope it's not showing?..Ughhh
Pratz 2015-10-12 06:21:40
+1
Where is the weekly horoscopes? I need some guidance! The lucky numbers are the only thing thats showing for all signs. Please fix this asap it will be greatly appreciated.
AHMAD SULTANI 2015-08-14 19:08:00
-3
CAN I GET MY WEEKLY HOROSCOPE ON MY EMAIL PLEASE
Hanna 2015-07-18 07:15:13
+2
I am a capricorn as well, younger, I was compared to being self fish and older I am younger and I love harmony and good conversation with ideas to try for all to become more thriving in areas of life even for children, love children and quiet ponderative moments in nature, but have seen male capricorns mercy, talk about the extreme and quiet and so unstable on what doing in life, glad I am a girl. 🤔
lovie 2015-05-13 00:04:07
0
😍 describes me i have over34 freinds not in cludind my famly memebers
x:) 2015-05-03 13:15:06
+3
My Capricorn is a gold digger only wants money and gambles is a beautiful lover but lies a lot always frustrated angry mania lives in lala land only Care's for himself very jealous and very demanding violent but very loving but a big narcicist only a one sided relationship don't understand some males thr heart breakers
x:) 2015-07-25 21:56:13
+5
This is so true of these signs
Beth 2015-06-29 04:31:24
0
my sister swindled bother her sister out of the personal items out of out parents estates she has alwayed been a money person will hurt anyone for money and lies unbbeleavable to get her way as long as she gets her way life is good for her has no feeling for other goes to extreames to get her way
christian 2015-06-12 15:07:52
+1
My female Capricorn was the same way , all about them , everything. never again...lies cheats and lies some more.

Karmen 2014-11-22 22:02:42
+21
I'm a Capricorn and very proud of it . Love Life to the fullest. There is nothing like being positive and always living in harmony. age dose not matter when it comes to loved ones and friendships, as long as i have love for all and i get that same love in return I'm a very happy soul. You could say I'm a walk of life!!!....
love 2014-09-17 01:33:19
+2
I dated a Capricorn male he was devoted extremely warm sensitive and thoughtful and made good money I use that against him cause I was money hungry n took advantage of his kindness I was a spoil brat wanting things my way when I didn't get it I left him....I want tell my zodic sign but if u ever find a Capricorn male keep him for all the right reason......Mr Capricorn male though she left u u r wonderful don't buy love pacify r babysit a lady b yourself n the right one will come to u stay focus on work n things that matters to u most
﻿
shubhankar bera 2014-08-28 15:05:57
-3
what my 31 horoscope

Weekly horoscope for Capricorn you've just read through must not become a set of immutable rules for you. After all, planets and stars are far from being creators of life paths. They are only the pointers gracefully arranged along the road by someone's noble hand. Thus, such forecasts are meant for those who want to both make the stars their allies and are ready to devote their entire selves to achieving a set goal. After all, no idea can realize without determination and strive no matter how favorable the stars may be.

At the same, pretty much any household problem can be explained by means of certain astrological methods. However, such meticulousness is excessive and this is quite obvious. This is first. Second, one may lose their mind or, what is equally detrimental, lose their ability to have an objective perception of the world if they start studying every trifle under the magnifying glass of astral energy. A weekly horoscope for Capricorn will never replace your own intuition and common sense. Your ability to analyze a situation and make the best tactical or strategic decisions on the basis of your analysis is what will bring you success. A forecast can only suggest when you should rev up your efforts and what you should pay most attention to. By the way, this is very important; after all, if you keep your guard up all the time, you can fry your nervous system; plus, your life energy resources are not bottomless. On the other hand, lack of care and constant lack of focus may have equally catastrophic consequences. And even though, I will reiterate myself, no one will make decisions for you, stars can guarantee some minor victories to you. Who knows, these victories may lay a foundation for an incredible success story in the future.

Thus, weekly horoscope for Capricorn is a collection of simple marginal notes in the notebook that only your hand can write in. And if while writing you turn to stars for help, these very notes will come extremely handy - they will help you avoid wasting your effort and help you make the most of it. The result will be you getting exactly what you have been after for a very long time.