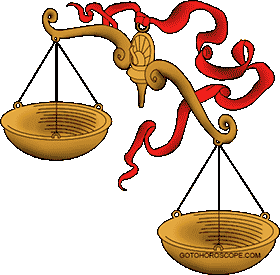 🌟If somebody spontaneously dons the superhero cape and fights your villains for you, soak it up. Conversely, if somebody suddenly acts like a cranky toddler, don’t feel obligated to serve milk and cookies. Careful. Mercury is retrograde now. Before you issue edicts, consider both the potential consequences of your actions and exactly how much you love to be bossed around.🌟

🔭 This week's Planetary Aspects for Libra

September 27, 2021 - Mars in your 1st House of Self-Image sesquiquadrate Jupiter

September 29, 2021 - Venus in your 2nd House of Self-Worth and Money trine Neptune

September 30, 2021 - Sun in your 1st House of Self-Image sesquiquadrate Jupiter

September 30, 2021 - Venus in your 2nd House of Self-Worth and Money square Jupiter

1787 Constitution submitted to states for ratification

1608 Captain Newport arrives from England with supplies for colonists

Joy 2017-02-08 16:37:43
+2
I'm also a libra, I am doing my best to be nice to my colleagues at work but they are just being plastics. It's hard for me to trust anymore.
Suvarna 2017-02-07 05:48:05
+1
When i will get good salary
Prince fasade adebowale t 2017-01-29 05:51:43
-2
Uhmmmm,being a libra is a great task,am partially tired of all this tribulations
Sidia 2016-07-27 10:42:28
+8
Is good to a Libra but not easy I luv libra
Johanna 2016-03-09 19:35:51
+1
i haven't recover yet for the loss of my mom 20th February then after 9 days another member of the family 29th February passed away whom i love dearly he mold me to be a better person and made me strong to face life difficulties i have learned so many things from him. he used to be my best buddy. always be there for me when i am feeling down. now you are gone... i do not know where and how to start... RIP i love you Daddy Charles.. you are always in my heart 🙁
Emily 2017-04-26 10:46:54
0
My mom passed away on Feb 22, 2016. My dad passed away Feb 01, 2004. My dad battled cancer for 3 years, but he was my rock. Watching him die was rough but I had the chance to take care of him for once and ask him all the things I wanted to know at the time. And he got to see me as a woman and not just his little girl. My mom however, passed away in one day. Her and my daughter were extremely close and my only option was to move 8hrs away from the town I lived in my whole life after she died. I recently lost my job and am doing the best I can, but I can't help but miss my childhood. It was filled with unconditional love and security and trust and I just miss my parents. For whatever reason the good die young, I like to think it's because I have a great purpose that isn't fulfilled yet. And altho I feel lost sometimes, I am a better person bcuz of my parents. A stronger person. Good luck to u.
Yeshuaha 2016-07-25 12:12:47
+1
Remember energy never dies. Their not gone but just changed form. Call on them whenever.
Nathan 2015-10-13 23:38:35
-1
Where's the weekly? Hope you guys are okay! Love reading your work!
Alia 2015-10-04 21:34:25
-2
Currently facing lot of problems in my life.Just waiting for my dream job and also interested to pursue research.But things not going right and as always I am confused.I am too nervous and worried.I just want this time to pass away..it's really disturbing.Suggest me when will I be able to experience happiness in my life?
Mzi 2015-10-05 11:05:47
+1
Iam same as you Allia. Ian waiting for a new positions and things just go in curcles. I don't know whether I will ever get this job. Sometimes I think, would not be libra
﻿
im miss A 2015-08-21 12:44:43
-1
I love ervin certeza garcia very much. !!!!
lovely 2015-07-16 13:48:21
+1
this week's horoscope (week of 13th july) is great and has manifested for me in the sense that my dad told me that he wished I had died when I had a near death experience last year and we stopped talking for many months and I felt unloved by him and as a result didn't feel like any man could ever love me but we sat down with a priest and my dad saw me sob about what he said and he didn't realise it affected me the way it did and so he apologised and instantly I felt a weight lift off my shoulders and the gates locking my heart open up and I now believe I can find love and he learned that his words can cut like a sword so yes, the horoscope is true, we learned lessons in a very harsh way but we found a solution and we are now back to how we were.
msvickie 2015-07-27 02:49:09
+1
I don't think people understand that words cut deeply - and as a Libran, I feel like it cuts us up the most. I'm always weighing people's words in my mind and sometimes it takes talking it out again before we can ease that burden in our hearts. As much as we want to believe we've weighed all the pros and cons of their responses, we will actually never know the true intention behind their words & actions without asking. Sometimes they were upset or saw something we missed. Whatever the case, we should speak up when our worries overtake our lives... or just learn to let go.

Weekly horoscope for Libra gives those born in this zodiac house a unique opportunity to look at their life under a slightly different angle. And even if some might think this angle far from being objective, it did prove its effectiveness long time ago. Otherwise this site would not exist, would it? After all it is the demand that drives the supply.

So, what is it about the horoscopes that make them so attractive - so luring that even the worst of the sceptics turn their eyes to the night skies with the purpose different from just admiring its beauty? As it has already been mentioned above, it is all about the effectiveness. A weekly horoscope for Libra is a view on your life from as high as millions of light years! It is not only the combinations and positions of the solar system's planets that are used to compose a horoscope. Distant crystals from familiar constellations also impact our lives in the most direct way. Surely, Mars or Mercury, for instance, have a much greater impact on our life and this is the reason why astrologers pay more attention to them. Moreover, they do everything they can in order to give you a chance to learn about if not all the obstacles, but most of them that could trip you along the way.

In other words, after you get up on Monday morning, have a cup of coffee and read a few articles in a morning paper, don't shy away from reading through a weekly horoscope. Believe us it might spare you a lot of headache. It doesn't mean, though, that you will suddenly get successful, famous and have the whole world at your feet. But you will have a clear understanding of which situations to avoid to save yourself from rouble and which situations to steer towards to make your wishes come true. That's why weekly horoscopes are here to help.