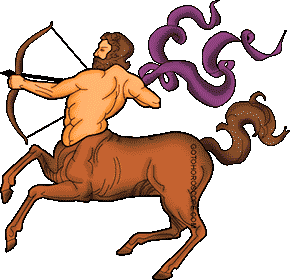 The symbols for Sagittarius are the hunter and the centaur, a mythical half-man, half-horse. This sign symbolizes the search for wisdom; this is the sign of the philosopher and the explorer. They have an appetite for learning and travel.

Such people prefer to be footloose and fancy-free, however, should they become involved in a relationship they make it as enjoyable and as much fun as possible. Normally they are very gregarious, but they will be glad to find the time for that special relationship.

They concentrate all their attention on whatever they are doing at the moment and seem to see no other way but theirs until their effort is made.

They are often great workers; such people never seem to tire until they drop with fatigue. They would rather learn on their own, through travel and experience, than endure structured classroom environments and routine work assignments.

These people are usually successful in business, but never feel confined to any one line. They follow the rule that if they have been successful in one thing, there is no reason whatever that they must follow it throughout life.

To have an open-minded and intellectual curiosity means that these people are willing to learn about other people in an effort to understand them while being trusting and open. High spirited and congenial, they are a gifted conversationalist, a wonderful storyteller, and a born entertainer.

Nearly all of them are devoted to music. They often make brilliant musicians. It is also writing, publishing, TV, communications, and enterprises where there are many representatives of this sign.

These people are, however, inclined to go to extremes in all things, and make sudden decisions, or change their minds rapidly, for which they may have regrets, but they are too proud to acknowledge their error.

One of their great difficulties lies within relationships. They are completely able to be faithful to two people at once.

The men of this Sign nearly always marry on impulse and regret it afterward, but they are too proud to show their regrets and too conventional to appeal to the courts for assistance, so they often pass for models of married happiness even when they are the most wretched. The women born under this Sign are, as a rule, the nobler of the two; they love to make their husbands successful and will sacrifice everything to that end. They are usually great church-goers. On the other hand, both men and women when they settle down they usually treat themselves strictly. They refuse to let the relationship get stale and always look for ways to bring excitement into the union.

Such people, in general, are representatives both beginnings: strength, because it is a survival mechanism and a weakness because are vulnerable to the demands and influence of others. Frank Sagittarius does not hesitate to give an honest opinion, which can seem tactless.

They venerate law and order can make the best of mothers. People born in this period, even when successful, should never cease to be actively employed inactivity for them would mean despondency and an early decay.

In the Sagittarius' character, there are combined such qualities as reliance, affability, and courtesy. People who were born under this sign get along with the people easily, but it is much more difficult for them to become close friends. They do it very cautiously. The Sagittarius usually loves sports, nature, traveling, learning and winning. The Sagittarius likes close company and being surrounded by many people. His mind and body require constant intellectual, emotional and physical stimulation.

They are the nicest friends in the zodiac. These people are not a meet-for-coffee friend. They are doers and they make the best travel companions. Their most lasting unions and friendships would be made with people born from March 21 to April 19-26, and July 21 to August 20-27, or in their own period.

They will be more inclined to suffer from rheumatism than from any other disease, also from a delicacy of the throat and lungs, as well as skin troubles. Physical problems, however, are apt to be the result of unrestricted diet or an over-indulgent pursuit of other pleasures. Sagittarians are also subject to an overpowering urge to gamble, which can be ruinous for some. They also, especially in their later years, suffer from the nervous system.

Their most suitable colors are all shades of violet and mauve and violet-purple.

Their most favorable stones are amethysts and sapphires.

HMMM This one is a hard one ... But then maybe not being there is the fact of being in love and not just having a love for them .... I was still actually partly still in love with with my X Boyfriend when I got with My future Husband we got together about 3 months after we broke up ( Got with him because I was getting a little crazy and needed to calm down )) I did like and I eventually fell in love with him before we got married .... but did find that I had still had feelings for my X and we still communicated after 4 years of my marriage passed by He called me at my job and then I realized I still had feelings for this man that I thought I put away Mind you I was always faithful to my husband it was after seeing the x boyfriend that I was able to put him to rest I truly believe that helped my marriage at the time after 31 years and getting divorced he still not know this'
-----Now mind you I am single now and have a few men that have made it clear to me they have great interest in me and feelings that they would love to explore .... But they have fear of doing so .... I have been told I scare them and have been told by the one I have been talking to know for 7 years that has giving me a open door to move in with him that I strike him as a woman who can light a fire and walk away from it .... I dont feel I am like that ... My policy is I make no promises that I wont keep or cant keep and I commit to no one there for dont have to be sorry for my actions ... But never been in love with 2 men can say have had feeling for 2 at the same time right now have
Steve 2017-07-22 01:03:39
+1
Message from Libra1008
okay, so I'm NOT a Sag, but need to know HOW you are able to love two people at once? Did all you Sag's agree with that aspect?
Hi. I could love thousands of women. Women are very beautiful and to have sex with 3 or 4 a day would be heaven