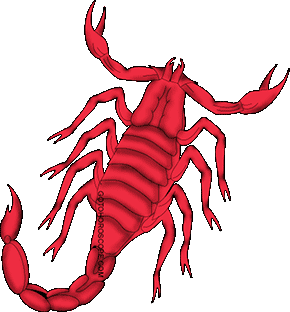 THE Zodiacal Sign of Scorpio commences on October 21st, but for seven days it does not come into its full power until about October 28th. From this date onwards it is in full strength until November 20th and is then for seven days gradually losing its strength on account of becoming overlapped by the "cusp" of the incoming sign - Sagittarius.

Symbols for Scorpio are the scorpion, a ground-dwelling killer with a poisonous sting in its tail, and the eagle, a far-seeing predator soaring above petty problems into the spiritual sky.

People born in this section of the year seem to be filled with inherent contradiction. The best and the worst seem to make this period their chosen battlefield.

Up to nearly twenty years of age, they are usually extremely pore-minded, virtuous, and religious, but once their nature is roused they are often found to swing in the opposite direction. At the same time, the greatest saints have been found in this period.

People who were born in this section of the year have great magnetic power, and as speakers, they appeal to the emotions and sentiments of their public more than to logic, but they sway their audiences as they choose. They are the searchers of the zodiac and have an insatiable desire for knowledge on every level. From spiritual and intellectual revelations, these people want the edge on everybody else.

In dangerous situations and in sudden crises they remain cool and very determined. Many of the very best surgeons have been found in this period. Representatives of this sign often become workaholics. They drive themselves hard and usually drive others unmercifully. They despise weakness in themselves or in others.

Their worst fault is that they are too adaptable to the people with whom they come in contact.

They always lead double lives; one for the eyes of the world and another for themselves.

In business and politics, they have clever ideas, but they are best as advisers of others. One of their main problems is that they have a habit to "put off things until tomorrow".

Such people usually excel in settling other people's quarrels and bringing enemies together to shake hands.

They have incredible personal magnetism, no other class of people makes more friends or have more enemies than those born in this period, but their strong personality carries them through like a resistless wave.

The sex quality plays a vital part in their lives. The women attract men and the men attract women, but in cases where the will and ambition are dominant, these people can control their strong sexual natures. Relationships are a kind of mystery for them so anyone involved with them must prepare for profound changes in themselves, their mysterious partner and the relationship itself. Usually, these people are interested in marriage and long-term commitment. To an average Scorpio, love is an intensely passionate and enduring emotion that may be directed at one person only.

People in this sign should, above all, be encouraged to have ambition, for it is the one thing that will save them; for they make any sacrifice or deny themselves any pleasure, and so accomplish more work than any other class.

In general, they need to dominate relationships and rarely display their true feelings even at the most open and communicative moments. Although these people may not intentionally set out to be mysterious, they manage to appear enigmatic anyway. They hate being crossed or manipulated and can react to such treatment with sarcasm and vengefulness.

In their home life the men are inclined to be dogmatic and expect to rule, but their influence over women is so great that they are almost always forgiven.

Sooner or later, they generally become interested in occult matters, they readily develop unusual clairvoyant powers and quite often gain fame and distinction as writers, painters or poets. They are natural philosophers, deep students of Nature, and observe and analyze other persons' characters better than any other class.

Usually, persons born in this sign have, or make, two sources of income. They often have to go through a great deal of trouble, difficulty and sooner or later success and fame nearly always find them.

When we speak about the representatives of the Scorpio's sign, we recollect unusual people with difficult or even tragic destiny. Even if Scorpio by birth is on the top of a social ladder, he often doomed to live suffering as it was, for example, with the wife of the French King Louis. She was hanged. There is such quality incorporated in the personality of this sign that is not peculiar for any other. It is self-destruction. That is strange enough, but it is a way of his development and realizations in this life.

These people as a rule only have a few friends and expect loyalty from them. They will find their most lasting friendships with people born in their own period and between June 21 and July 20-27, from February 19 to March 20-27.

These people, as a rule, are very slight and thin in their early years, but put on weight and are inclined to corpulence after reaching middle life. Scorpio rules the reproductive organs and excretory system, so those with Scorpio active in their charts suffer headaches, infections, and fevers, along with various illnesses to do with what used to be called the secret parts. Later the heart is also inclined to be their weakest organ, and they should be careful not to overstrain it in exercise, or in work.

The colors most suitable for persons of this period are all shades of crimson and blue.

The birth stones for this period are the turquoise, the ruby, and all red stones.