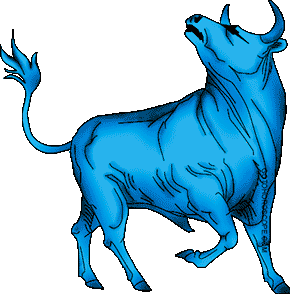 THE zodiacal Sign of Taurus commences on April 20th, but for seven days it does not come into its full power until around April 27th. From this date onwards it is in full strength until May 20th and is then for seven days gradually losing its strength on account of becoming overlapped by the "cusp" of the incoming sign Gemini.

Taurus is the sign of practicality and possessions. People born under the sign of Taurus tend to be very patient, practical and dedicated people. Such people are usually very cautious when dealing with people, life, and money. They have a curious power of dominating others, even when not conscious of trying to do so.

People who were born in that time are extremely faithful, with a strong need for security and a settled routine. Although they are very earthly, they can also be highly romantic and sensitive when it comes to love.

They have great power of endurance, both physical and mental, and can pass through enormous strains of fatigue as long as the excitement or determination lasts.

They make wonderful hosts and hostesses and have great taste in food, and in the management of their houses, they can make a lot out of little.

These people often become excellent directors, have good business intuition, but are generally considered richer than they really are, as they always dress well and look well.

They are governed by their sensations and by their loving nature, but affection has a greater hold on them than passion. Such people are also warm and sensual, with an appreciation of the finer things in life. Taurus is motivated by a need for security; this sign is good for business matters and can be trusted to carry things through with absolute care. These people are very strong-willed and often quite creative. The Moon is exalted in Taurus, finding success in matters to do with the public and, combined with the influence of Venus, a passionate nature endowed with a strong sense of loyalty and fidelity. They are kind and generous with friends, with whom they develop an unspoken rapport.

If they love, they are generous to the last degree, and will consider no sacrifice too great for the person they care for; if they are enemies, they will fight with the most determined obstinacy. But they always fight in the open, for they hate trickiness, double-dealing, or deceit.

They are easily influenced by their surroundings and become morbid and morose when trying to live under uncongenial conditions.

They are also too easily misled by their emotions, sensations, or affections.

As a rule, both sexes are jealous in their disposition, and their jealousy often drives them into acts of violence or sudden exhibitions of temper, which they bitterly regret when the storm is over.

They are at their best are typically strong and silent, but often appear ignorant and willfully obstinate to others.

They have an innate sense of harmony, rhythm, and color, and often are very successful in music, poetry, and art. Those born under this sign have an ability to become the most faithful, loyal friends. They also make good, patient nurses and healers, and almost all have a keen love of gardening and flowers.

Typical Taurus is a warm, gentle, passionate, and friendly person, though he/she never shows it. The bull is the absolutely exact symbol of the sign. People of this sign usually use force to achieve their purpose. They frequently named "as the salt of the earth ". They perfectly know what they want and persistently work to achieve this purpose. It is difficult for them to understand other people, but in general, the Taurus a positive sign. People born under the sign of the Taurus are usually friendly, though sometimes slightly boring because of their restraint and reticence.

They will find their most lasting friendships with people born between August 21-27, and September 20-27, December 21 and January 20-27.

In health, although, as a rule, endowed with a splendid constitution, they suffer with all things that affect the throat, nasal cavities and upper part of the lungs.

The most favorable colors for them are all shades of blue. Red is an exciting color for them, and they should use it as little as possible.

The birth stones for this period are emeralds, turquoises, and lapis lazuli.

In health, although, as a rule, endowed with a splendid constitution, they suffer with all things that affect the throat, nasal cavities and upper part of the lungs. - Learning how to sing in the correct way really frustrates me

The most favorable colors for them are all shades of blue. - TURQUOISE 😍

It is difficult for them to understand other people. - EXACTLY

People born under the sign of the Taurus are usually friendly, though sometimes and is slightly boring because of the restraint and reticence. - Hence the love of being in the comforts of home LIKE ALWAYS