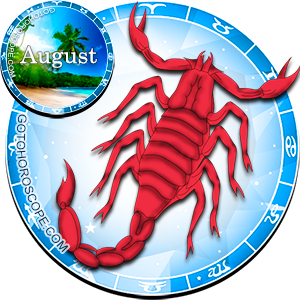 Scorpio in August 2013, will have to count on himself in many situations, however, he has a good chance of success, both in the business aspect as well as in the battles of a different kind. Mercury's passive negative energy, who has decided this month to concentrate a large enough portion of its negativity towards the Water trine, will be almost completely neutralized by the celestial leader of the Scorpion sign - Neptune. At the same time, Mars, the celestial ruler of the Scorpio sign, instead of the traditional positivity will cause many problems for the representatives of this sign. There are two reasons: the position of this celestial body in the month of August, and the fact that Mars will appear as the direct enemy of Neptune. As a result, Scorpio will have enough complicated situations in the business aspect even without Mercury's help. On the other hand, when it comes to the love life Saturn, exalted in Scorpio, will successfully fight the negative effusions coming from Venus, which will be reinforced by the position of the Moon. Strictly speaking, the result of this battle is difficult to predict, but one thing is clear - blindly relying on the stars will not work very well during this month.

Now is the best time to start your own business, or if you already have one, now is the time to improve it to the next level. Although, the celestial bodies do not predict continuous success when it comes to the entrepreneurial aspect of Scorpio's life, in August 2013, the representatives of this sign will have the opportunity to successfully complete the job. The main thing is to have faith in yourself, to the very end, despite all the troubles and problems, and the once chosen path. As corny as it sounds, right now, you are in the need of a lot of faith. Believe in yourself, and have faith in what you are doing. Let the spark of doubt enlighten your heart and make everything into dust - Mars will not leave a trace of your efforts. The red planet will be quite strong during this period. And the thing is that its brute strength and confidence can be only countered by some rough confidence and power. If you can control yourself and not fall under the pressure of the circumstances, you will definitely feel better the full Moon (21 August), and towards the end of the month you will definitely discover that you have nothing to worry about.

When it comes to Scorpio's love life, there is only one certainty, although there may not be any. Saturn appears to be strong enough to fight against the stellar negativity - he is a great ally. But after all the Moon and Venus, were not born yesterday, so probably Saturn will not be able to completely neutralize them. Even more so, since he has no helpers. This means that the ones born in the Scorpio sign will have to activate all of their internal resources to reduce the number and magnitude of future conflicts to a minimum. Be especially attentive to your other half, now it is the hardest subject to influences from the active negative energy of Venus. This means that something irreparable can happen, so thanking a close look is a must. The problem will be the fact that your other half will behave very strangely and will want you to look after her. The Moon will also make its contribution and, will give you the the opportunity to play along with your passions' circumstances. The result - suppressing all antics will be extremely difficult. However, if you find that your relationship is not worth all that effort on your part, you can safely go in search of something more. The final choice is always yours.