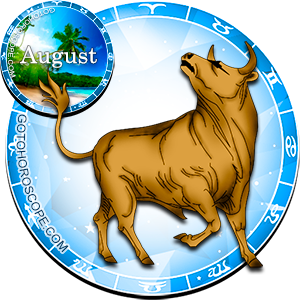 The principal sign of the Earth trine, Taurus, in August 2013 will most likely be able to meet his destiny. Just not in the novelistic manner, to which we have gotten used to understanding this turnover. Everything will be developing a little bit differently. The fact is that the Sun, being the celestial body responsible for the exaltation and for the blossoming of the strength of the sign of Taurus, during this month will significantly increase its beneficial influence on the account of other stellar combinations. As a result, we can add Venus's active positive energy of to the solar streams, the celestial ruler of Taurus. The main aspect of this situation is, that nor the Sun or Venus will be focused on any area of Taurus's life. What does this mean? It means that some serious problem may still emerge in the business aspect, because Mercury's negativity will be freely distributed to all representatives of the Taurus sign. At the same time Saturn, the one responsible for the "fall" of the Taurus sign, even though it is his "celestial leader" it's very unlikely that he will neutralize its own negative impulses, which are primarily aimed towards the personal life of the Taurus sign. The why will the influence of the couple Sun-Venus make its appearance? The reason is that at a certain point, these celestial bodies will allow Taurus to do something that will determine its future existence once and for all. It is not difficult to guess, in a positive perspective.

In August 2013 the entrepreneurial aspect may not develop very successfully for the Taurus sign. However, on the other hand, those born under this zodiac sign have all the opportunities to direct all financial streams in the necessary direction. This is especially true on August 7 (New Moon) and, to a lesser extent, on the 21st (Full Moon). Only on those days the concentration of positive cosmic energy will be the highest for the Taurus sign. Meaning, everything is in your hands! And you will not be required to do any kind of super-human efforts. Simply try to focus on the most important projects and, do not forget to establish relationships with your colleagues. Your first priority should be the spread of harmonious attention. Treat equally all initiatives coming from both your superiors and from your colleagues. Certainly, as long as these initiatives do not contradict with your personal aspirations and your moral principles. At the same time, remember that you now need to be especially careful in everything, because in any moment the stars may be able to cross the threads of Fortune and Eldorado and turn your dreams into reality.

A similar situation will develop in Taurus's love life. The celestial bodies are not predicting any significant disruptions. Perhaps Saturn may try to fish out your old enemies and use them to cause harm to your current relationships. But his attempts, although they can be successful, will not have the proper charge, which means that even without the help of stars; you will be able to fully cope with them. Simply try to be understanding of the aspirations of the people surrounding you. Be a little more gentle ... and it will be easier than ever. Then even Pluto, the one responsible for the "exile" of the Taurus sign, is unlikely to be able to prevent the implementation of your plans. Thus, although it was aforementioned that you destiny in August will be mostly focused on other aspects of your life, it does not mean that the goddess of love does not gift you with something new and surprising during this time. Look closely at your "other half", perhaps, now you will see something new, unobtrusive, but important. In case if you are single during this time, then August may be the right time for you in terms of creative implementation.