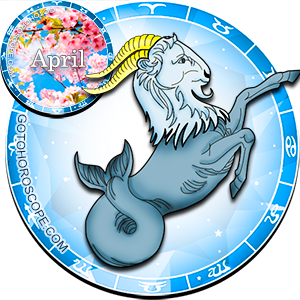 In April 2014, the sign of Capricorn will be one of the few signs of the zodiac belt to which the general stellar combinations will be mostly sympathetic. This sympathy will be characterized by both an even spread and significant strength, even considering the energy crisis among the celestial bodies of the Solar System. For example, Saturn - the planet-ruler of the sign of Capricorn, will also play the role of its "celestial leader" this month, due to which the power of this planet will expand greatly and its influence on the sphere of business and finance will be unprecedented. The love life will face a similar situation. Mars, which is the planet-exalt for Capricorn, will get extra energy bonuses due to general combinations and will not forget to share them with its earthly protege. The result of such a noble gesture is evident. At the same time, the Moon - responsible for the "expulsion" of the Capricorn sign and Jupiter, responsible for its "fall", will not lose their strength. However, these planets, lacking the help necessary, are unlikely to be capable to fight Saturn and Mars, though of course they will provide a portion of their negativity.

As a result, the sphere of business in April 2014 will be a successful direction for the Capricorn sign. Just do not stand idle for a minute in front of barriers or victories. As soon as you will dial down your work speed, you will lose a lion's share of the stellar support. This does not at all mean that you will have to be a workaholic. Work a due amount; try to concentrate your attention on what is important and do not get distracted. Attract colleagues and business partners to your side. Currently, your ability to persuade will burn with a new light, which will give you a unique ability to change your surrounding work area and the entire work process. Pay special attention to effectiveness. Extra hassle definitely does not do well for anyone, but the timely execution of the necessary functions is a key to success, which you most likely know. If you do not work for yourself and have bosses, then this month you and they will exist practically in different dimensions, which in certain situations will certainly play to your advantage.

In terms of the love front, you might face certain disappointment towards the end of the first ten-day period. It is hard to be more precise, though if you think hard enough you will be able to find the cause even now. It is evident that in one way or another this is connected with your lover. Regardless of the result of this situation, you should not worry too much - this is just a prep test for what the stars are preparing for you in the future. Be patient and do not forget your past mistakes even for a second. That experience will help you avoid new problems and receive something that perhaps you have not even dreamed of. In regards to relationships with your close ones, then everything will fall into place with harmony. Just try not to be a reason for argument or conflict; this may cause large and unpleasant problems for you in the future. For example, listen to the advice from your friends. There is a large probability that you may currently be able to form something big, something you have been waiting for a long time to do. Just do not give up from your planned goal, especially since all barriers will be small and can be overcome. As a result, this month may turn out to be a harmonious time full of victories and unforgettable adventures.