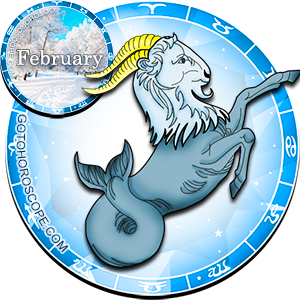 The sign of Capricorn, in February 2014 will end up in quite a curious situation, the precise tone of which will be hard to determine. The reason for that are the combinations of various celestial bodies that are directly affecting the lives of the representatives of this sign. For example, Saturn, the planet-ruler of Capricorn, will significantly strengthen its positions and help its sign with a strong defence. At the same time, Jupiter, the one responsible for the "fall" of the Capricorn, will also be strengthened to a significant degree, so that its active negative energy just might break through Saturn's shield if the circumstances align. The Moon, responsible for the "expulsion" of the Capricorn, will be strengthened through the nearest combinations, so her negativity will be felt stronger than usual. At the same time, the protection of Mars, the planet-exalt responsible for life's energy of the Capricorn, will be stronger than usual as well. It is logical that when such antagonists combine, the result of the battle is hard to predict. However, it is certain that the Capricorn will not have it easy, but will definitely have all chances for success.

In particular, if speaking of the business sphere, then February 2014 will be a time when the Capricorn will have to face a plethora of problems, many of which will be explained by HR shifts. However, on the other side, it is quite possible that the reason for the conflicts will not be personnel turnover, but rather the change of the management's leadership politics. One thing is for certain - your problems will not arise from colleagues or from technical issues. So get your main weapon ready - the sum of diplomatic skill and attentiveness. Only with a clever development and use of these two qualities, as well as with the guaranteed help from Saturn, may you be able to overcome the difficulties that await you. However, do not forget to occasionally look to your sides and to the back, otherwise you risk losing what you already have while in the heat of the battle. A balance of strength and moderation will not hurt you. If you will be able to do everything right, then by the time the second ten-day period ends, the flow of problems will suddenly dissipate and you will be surprised to discover that you defeated all your foes, while the work done promises you significant bonuses.

In terms of personal relationships, everything will happen differently. Here, a few types of conflict situations await you, each one of which has different motives and different methods of elimination. In the first ten-day period, you will face the first type of problems related to the relationships between your friends with you and between each other. Here you will require the maximum patience. Do not rush into the fight, first evaluate the situation, and only then make the decision. In some of the cases, the fact that you will actually listen to someone spill their heart out will alone be the solution to something. Your empathy and intuition will help you. In the second ten-day period of the month, the Moon will suddenly change its direction of influence and you will now have to manage your relationship with your lover. Here, passive behaviour will definitely not help you. Only a scandal will help, but one that is planned and effective. The exact way of how you can make this happen depends on you, especially since Mars will help you. Do not be shy to yell and to break some dishes - it is better to do so, then to spend half of your life living the consequences of this conflict. The third type of problematic situations may not occur if you do everything right in the second ten-day period of the month. If not, then be ready for conflicts with your family members, the solution to which depends solely on you.