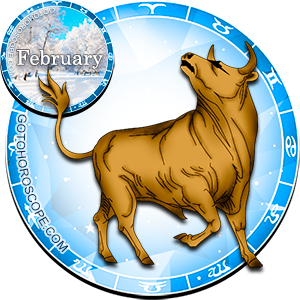 The sign of Taurus, the leading sign of the Earth trigon will be almost the only sign in February 2013, in relation to which there will be more positive Solar combinations than negative ones. Nevertheless, some amount of negative energy will be present in any case, though to a much smaller degree that with any other zodiac signs. Here, locations of Venus and Saturn should be primarily noted. Venus, being the planet-ruler of Taurus, even in its normal position always has a positive affection for those under this sign. In February, some of the emanations of its active creative energy will be strengthened to a new level because it will play the role of the "celestial leader" of Taurus. As a result, the Taurus do not have to worry about the sphere of positive relationships, everything here will be undoubtedly "captured". In regards to the business sphere, some problems may arise. The reason for that is the Sun, which will turn into an aggressor from the planet-exalt status, and instead of giving the Taurus its energy - will take energy away. Thankfully, Saturn will not help the Sun due to some general combinations.

Any entrepreneurship or business issue should be a subject of significant scrutiny for the Taurus in February 2014. In other words, do not hurry to sign business agreements. Of course, your celestial protectors will defend you against any massive problems and dangers arising from your enemies and competitors. However, no one will protect you from your own lack of attentiveness or foolishness. It is precisely here that the solar impulses of negative energy will place their bets. So if you do not want to end up in a troubled position, spend an extra day to review the papers. If you do not understand anything, bring specialists on board. This will take more time, but at least later, you will not be cursing yourself that you have not seen a small but a fundamentally significant comma. If you do not work for yourself and do not have anything to do with large business deals, then that does not mean that all dangers will simply pass you by. Pay attention to the bureaucratic paper part of your work, as it is specifically in this direction that unpleasant issues may arise.

However, on the love front, you cannot ruin anything even if you try. Yes, because it is your zodiac sign that was mentioned in the beginning of this article as the solely successful one. Of course, if you tell your friends off and will demonstratively brush your feet on them time after time, then this will not end with anything good. However, you are not going to do that, right? Overall, you will have the best of the best in this direction. Full harmony and mutual understanding in the family. Warm and sincere relationships with friends. Clean and tender passion with your lover. With the definitely strong signs of personal energy, you can even transfer part of home warmth onto the job sphere, which will significantly ease your time spent at the office. Critical situations will be easier and overcoming them will be simpler. However, there is one danger present. You can relax too much, get used to the serenity and lose your ability to overcome circumstances. So try to be attentive and demanding of yourself.