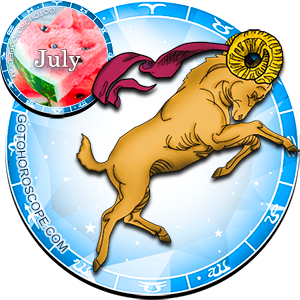 For the zodiac sign of Aries, July 2014 will be a complicated time. There is a high probability that some representatives of this zodiac sign will not be able to handle the rough energetic perturbations. The result will be a sad one. However, the essence of the issue is not at all in whether the Aries will receive just a negative impulse from the celestial bodies of the Solar System. On the contrary, this sign will also have strong allies. For example, some general combinations will significantly strengthen Mars, the planet-ruler of the Aries. Venus, responsible for the "expulsion" of this sign, due to those same general combinations will change the vector of its emanations and will fully support the representatives of this sign. What is more important, is that the ravaging warrior and the priestess of love will fight in between each other, and this fact may not always be reflected in the most positive events for the Aries. Also, the exalt of the Aries sign, the Moon, will betray its earthly protege and will turn its power against it. Saturn will fully support the Moon, being responsible for the "fall" of the Aries and with multiplied strength from the negative solar energy. As a result, the current time period will be characterized by powerful influxes of energy, which for the representatives of the Aries sign will manifest itself in an ambiguous and in many ways uneasy life stage.

The sphere of business and entrepreneurship will most likely be an ambiguous side of the Aries's life in July 2014, since this is where the maximum of the celestial conflicts will be concentrated. So on the dawn of the first ten-day period, be prepared for surprises. Sadly, but most of these surprises will not reflect too much positivity, though unseen catastrophes are also unlikely. It is likely that management will not support any of your initiatives, and you will have to occupy your time with truly stupid projects, none of which will support your development (not in terms of professionalism, not in terms of career). You should not await for anything positive from the side of your colleagues either, while constant minor mischiefs will be in the natural order of things. Overall, nothing too critical, but in the sum it will be very unpleasant. To surpass these difficulties, just focus on your wishes. Aim towards what you really want, even if it subtracts from your direct obligations, you will not be fired and you will definitely not have it worse. However, with such a direction you have all chances to realize your desired goals towards the end of the third ten-day period, while proving to everyone that you were absolutely right.

In terms of the "love front", the situation will be much more positive. At a minimum, the brightly exposed positive influence of Venus will already show itself in the middle of the first ten-day period, reaching a climax towards the Full Moon (July 12th). At this time, you can also hope for full mutual understanding with friends and relatives. In terms of your relationship with your lover, it is specifically now, during the middle of the month, that you can notice an important tendency. Many astral aspects will be concentrated on this moment and predicting the scale of the upcoming events is extremely difficult. It is evident, that a lot will depend on your joint actions (yours and your lover's), but the full picture will only present itself to you towards the middle of the third ten-day period. The stars recommend that you trust your feelings during ambiguous situations, not your mind. With that, throughout the entire forecasted period, you should especially trust the opinions of others, they will currently be much more correct (exactly right) than your own thoughts.