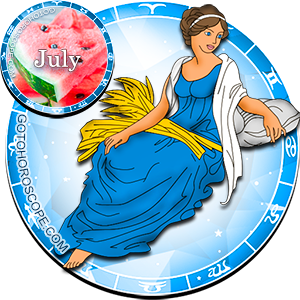 In relation to the zodiac House of Virgo, July 2014 will most likely be a balance and a harmonious time. At a minimum, throughout the entire forecasted period, creative tendencies will dominate the destructive ones. This means that any affair that the Virgos commit themselves to will get exactly the kind of development that the representatives of this sign plan for. On one side, this guarantees success with the condition of great effort towards it, but on the other side reminds the Virgos that if they do not assign the due importance to the events around them, then they are guaranteed failure. Fair? Absolutely! You should mainly thank Mercury and the Black Moon for that. Mercury, being at once a planet-ruler and an exalt of the Virgo House, will be quite nice towards the representatives of this sign. There will be no sudden bursts of energy, but with due persistence anything is possible. The Black Moon, however, will grant events its almost unnoticeable at first glance portion of balance and connection. Venus, responsible for the "fall" of the Virgo House, will change its negative emanations onto positive ones, but the waves of her positive energies will most likely be screened by the negative influences on behalf of Neptune. As a result of the interaction of the two planets, they both will cancel out their influences.

In terms of the work direction this means just one thing - in July 2014, the sphere of business for the Virgo will depend first and foremost on the Virgo themselves. In other words, you will reap what you sow. While such a statement must be at the essence of all energetic influences, perhaps you will be interested to know that in reality this occurs quite rarely. This is why you can say with certainty that July 2014 will be a successful time for you. No one will stand in your way - not management, not colleagues. The competition will be aggressive just enough to prevent you from letting yourself go. There will be no large conspiracies against you or your business, so you can calmly plan any events throughout this time. With a careful approach, you will be able to realize everything in the best way possible. However, it is evident that there is effort due on your part. Also, pay special attention to the technical aspect of the issues. It is quite likely that during the most critical moments it will be machinery that lets you down, so to avoid such situations - better check twice.

Checking twice will be a motto also relevant to your personal relationships. The "Trust but verify" aphorism, with all of its inherent mercantilism and rudeness will be quite handy during this time. Indeed, you should pay more attention to the actions of your close ones and most of all to those of your lover. If you are single, then in this case do not worry about betrayal. However, if you do have a "second half" whom you mistrust, then it may just happen that your mistrust was not irrational. If you do not worry about her, then the stars recommend that you review the situations at hand more carefully. The excessive self-confidence or confidence in anything will successfully play against you during this time period. However, it is undoubtful that clean and sincere feelings are the prevailing factor for you. People, who fully trust each other due to a mutually deep feeling, should not worry about anything. For the rest, the stars recommend to reassure yourselves. Unless, of course, you do not care.