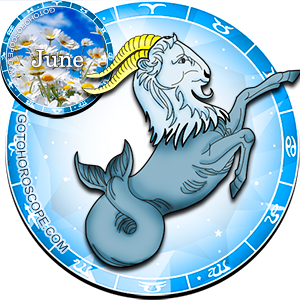 In June 2014, the Capricorn will experience a powerful multidirectional influence on the account of several planetary combinations, as a result of which, it seems impossible to definitely determine the energy tint of the forecasted period. At the same time, it is quite evident that on the "love front" everything will be going even better than a Capricorn could have imagined. This will be the fault of the combined positive influence of the Moon and Mars. In its usual position responsible for the "expulsion" of the Capricorn, the Moon will change its negative emanations to the waves of active positive energy in June. Mars, the planet-exalt of the Capricorn sign, will on one side strengthen the influence of the Moon, on the other side it will grant the representatives of this give zodiac sign additional energy, which will allow the Capricorns to playfully resolve any current problem in this direction. In regards to the sphere of work and entrepreneurship, then everything will be going according to a slightly different scenario. Saturn, the planet-ruler of the Capricorn, instead of the traditional positive emanations will grant those born under this sign a portion of concrete negativity that will spread in full synchronization with the negative energy of Jupiter, responsible for the "fall" of the Capricorn. In light of the fact that both planets will be significantly strengthened in this period, it is quite evident that the work area of the Capricorns will be quite complicated.

In other words, in June 2014 the work sphere of the Capricorns will be the concentration of the maximum amount of problems and conflicts. On the dawn of the first ten-day period of the month you can already prepare to not finding a common language with the management, so all your initiatives should be postponed to a better time. While, undoubtedly, if you put everything on the line and collect your most convincing arguments will try to quickly prove your point of view, showing your definite wish to go to the end, then perhaps your plans will be a success. However, for this outcome you will be required to concentrate your maximum willpower, confidence in yourself, professionalism and diplomatic mastery. If you can successfully form this combination of qualities in the right moment, then you still have some chances for success. Is it worth it - up to you? In the second and third ten-day periods of the month, you should calm all of your creative impulses and try to focus on executing the tasks given to you by management. If you have your own business then do not try to overcome your competitors during this period. You may even win, perhaps, but the result of this victory will not influence you in the best way in the future.

In terms of the "love front" the planets of the Soalr System will be fully on your side, no matter the problems on the work front, the family hearth will be burning well and positively. It is likely that your relationship with your current lover will be strengthened by your joint activities. Even if you are single during this time, then the stars whisper that with certain level of attention (and then persistence) then by the end of the second ten-day period of the month you will most likely meet your "second half". In your relationships with friends, it is quite likely that a situation will arise where one will need your help. Do not deny them this help for any reason, even if it could lead to some problems. While the choice is always yours, you should remember that friendship is that something small that allows us to believe in the world no matter what.