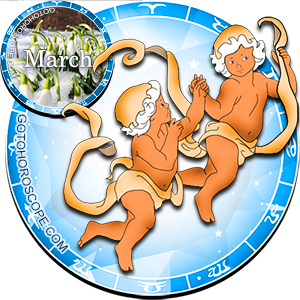 During March 2014, the zodiac sign of Gemini will most likely face several problems, solving which will be more complicated than the Gemini might first thing. This is due to the generally not so positive atmosphere. The planet-ruler of the Gemini, Mercury, will be strengthened by several combinations that will give a good defense against negative circumstances in terms of the business sphere. The direction of the "love front" will be protected by Saturn, the planet-exalt of Gemini. On one side, everything will be quite positive and confidently stable, especially if you consider that Jupiter, the planet responsible for the "expulsion" of the Gemini sign will lose all of its power, especially due to the influence of Uranus. However, you should remember that Venus, responsible for the "fall" of Gemini, will have its strength multiplied due to several general celestial combinations. Yet, its negativity will not be spread evenly nor focus on just one sphere. This time, the Venus will be much cleverer: the waves of its negative energy will be like one-time shots. Of course, Venus will shoot the places that are least protected and during the worse times.

For example, in terms of the business sphere, the influence of Venus in March 2014 will be especially strong on the Gemini during the moments that the Gemini themselves will be experiencing doubts. In other words, if you doubt something, then this is where the celestial priestess may strike. So with the first signs of danger, it is best to leave this direction alone. However, if you are resolving a life-or-death situation that you cannot just simply leave, then you must use the maximum of your capabilities and activate your hidden reserves to throw everything into battle that you can. If you will be persistent enough then your planet protectors will not leave you alone and will give you strength during the right moments. However, if you will be unsure of yourself or will face apathy during the critical moment, then do not even dream of success as stars only help those that are ready to fight for their happiness.

In terms of the love front, everything will be different. You won't even have hints at problems, not even mentioning a full lack of problems themselves. Strangely, but in March 2014 your zodiac sign will fall into that unique stretch where the negative influence on your relationships with friends or family is simply impossible. You can plan some event associated with some active activity. In relation to the general stellar combinations, this will be the ideal way to spend your time, though you of course should not forget the serious problems at work. However, if you will do everything right, then by the middle of the second ten-day period you will be absolutely unbounded for time. Your close ones will support any initiative from you. You should pay special attention to your lover. It is during this period that you should seriously think what kind of person is beside you. Do not be afraid of your thoughts and do not be afraid to take radical measures. For you, March is not only a positive time for developing relationships but also a month that can start a new, strong and sincere connection that perhaps you lacked for such a long time.