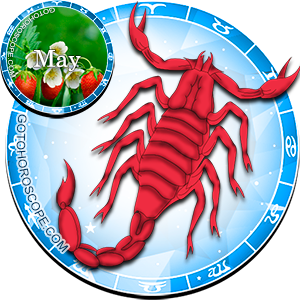 For the zodiac sign of Scorpio, May 2014 will be a time that is quite balanced and full of harmony in the sense that problems in one area of life will be definitely balanced out by successes in the other one. The scale of problems and successes will be equivalent. In other words, if the Scorpio has ended its relationship with its lover, then it can expect a raise at work. This is a rough example but enough to demonstrate a point. The Scorpios owe this to the following combinations of the celestial bodies. Saturn, being the planet-exalt of Scorpio and thus being responsible for the blossoming of its life strength, will be strengthened this month by its role of the "celestial leader" of the water trigon. As a result, while working in tandem with Mars, the ruler of Scorpio, Saturn will be concentrate on first one and then the other area of Scorpio's life. Venus will not be idle on the side, while it is responsible for the "expulsion" of the Scorpios, it will fully become their ally in May - due to certain celestial combinations, but the concentration of its efforts is unclear. Thus, the only foe that the Scorpios have left is the Moon, the negative emanations of which will be quite strong but uneven.

This way the sphere of entrepreneurship and business may bring Scorpios something large and successful in May 2014. Another result is also quite likely: May being the time of a stable and growing progress, not anything spectacular. Some real problems are unlikely to occur in this direction. Of course, if you decide to just abandon everything and hope for the best, then nothing good will happen. So the main recommendation is to concentrate on work, not excessively, but enough to fully control this direction. For those who have their own business, it would not be excessive to have an extra evaluation of your personnel and of yourself as well. This must be a demanding evaluation, not giving a second chance to anyone. This move will be extremely positive for the production process and will become the guarantee of its stability for a long time. Scorpios that do not have their own business should be a little more attentive to their colleagues. Perhaps you will have a good working tandem with someone, which can turn out to be a productive business-partnership.

On the "love front" everything will be far more active. Strictly speaking, it is from this direction that your overall life state will depend this month. In the sense that harmony, which was mentioned in the beginning, will most likely be determined by specifically the area of personal relationships. If everything will become better here, then the pressure at work will increase, and vice versa. So it will cost you significant effort right now to keep everything in a balanced state. By the way, no one said that you could not do it. It is enough to just listen to your lover, understand her motivations and aspirations. Of course, you should not force yourself if your lover has radically different key life principles than you. In this situation, you may be an ideal pair that will fill each other with various interests and views, or on the contrary, life together may be absolutely unreal. It is sometimes easier to let go than to fix. You can agree that unstable relationships are unlikely to bring you to the peak of happiness.