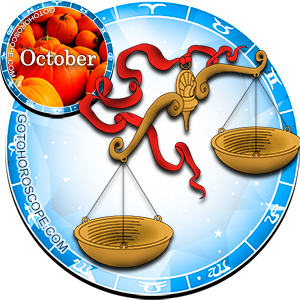 The stars recommend that the Libras rely on themselves in October 2014; much more than on the external circumstances or someone's promises, even if that someone is a relative or someone close. The thing is that during the current period the celestial bodies of the Solar System will play an unpleasant prank on the House of Libra. Saturn, in his usual position the planet-exalt of Libras, will change his active creative energy emanations to the direct oppose ones in October. At the same time, the Sun - responsible for the "fall" of the Libras, will fully switch to being an ally of the representatives of this zodiac constellation. Such a change will cause some energetic perturbations, which will be the exact reason behind the illusory nature of many potential events to unfold in the upcoming period. In other words, it will be very hard for Libras to distinguish something real from what is not. Venus, the planet-ruler of Libra, will try to help her earthly protege. The energy of the love priestess will not concentrate on one life aspect of Libras, but instead the diluted astral waves will serve as a good shield from many external "enemies". For example, from Mars - responsible for the "expulsion" of the House of Libra and very active during this period.

The direction of work may appear to Libras as a very successful area of their lives in October 2014. It is very much possible, if you focus directly on the work process and will not let circumstances distract you. This is precisely what the negative celestial bodies are going to aim at. Saturn will attempt to bring maximum ambiguity into your life and the optimal way to address this situation would be to ignore practically all external circumstances. Do not pay any attention to methods of attaining an extra income flow. Do not dilute your attention onto additional projects. Do not rush to help someone until you finish the core part of your work. All these issues (and those similar to them) will not bring any good to you. If you distract yourself from your goal even for one moment, then you can say goodbye to the success of your venture. Due to the fact that your exalt has currently moved to the "dark side", you will not have enough energy to work in multiple directions. This is why you should concentrate and pay special attention so that no one from your coworkers would also get distracted.

The love front will have a cold attitude to change in October 2014. It is likely that in the very beginning of the month, you will have to change a lot in your relationships with close ones and friends. Far from all will accept change in the way you want them to. However, you will have an additional chance to see which ones of your close ones are truly close. Despite the ambiguity, such situations usually have one defined benefit - they tear off masks, despite statuses and accomplishments. Perhaps you are heading towards a breakup. Yet if it is so, it will have good reasons to happen. Not something like cheating, but definitely a loss of trust. No one said that you will be at fault. The stars have nothing to warn you about here, it is only your choice, your behaviour and our attitude towards the issue that will determine all of the possible outcomes of events. In terms of your relationship with friends, there are no problems foreseen during this period. You will be fully supported in any endeavour, even though you must be ready to present everything in an unusual perspective to attain your goals. Do not lie in any case! However, you can play around with circumstances to achieve what you want.

First learn English. Then worry about your horoscope. Right if right not wrong is not wrong right it is.