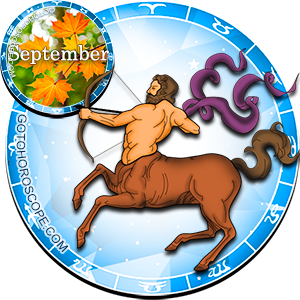 For the zodiac House of Sagittarius, September 2014 will be an ambiguous time, which will de facto have two dominating sides. While both of these sides will be positive, there is some possibility that the Sagittarius will not be able to determine his own desires and will arrange priorities incorrectly. Meanwhile, that is not the scariest thing that can happen in the life of a human. In addition, the general celestial mood is sympathetic towards the Earth's inhabitants during this time period; and do the House of Sagittarius in particular. Venus, the planet-exalt of the Sagittarius, will be significantly strengthened by its membership in the "purple triangle" and y the other interstellar combinations. As a result, the Sagittarius will have enough life strength for anything; in addition, he will receive an impenetrable shield for his "love front". However, this fact will have some nuances, which will be further discussed below. Jupiter, the planet-ruler of the Sagittarius, will focus on the work sphere and luck will follow all actions of the representatives of this given zodiac constellation. It is evident that Mercury, responsible for the "expulsion" of the House of Sagittarius, will be the only celestial body of the Solar System with a negative mood. Most likely his negativity will focus on the sphere of business.

This way, the Sagittarius will meet two contradictory tendencies in terms of his work sphere in September 2014. On one side, the energy of Jupiter will construct your actions into the most successful combinations, the result of which will be the fulfillment of the set goals. On the other side, some not primary, but altogether not less important directions may be seriously undermined by Mercury, who plays lead violin in the sphere of business. However, you can fight Mercury on equal footing during this time, which means that any problem is not going to be just easily solved, but can also be turned for your benefit. Here you will just have to strategically allocate your resources. Some part of them will have to be left for the resolution of important issues, but the lion's share will have to be directed towards secondary elements. This is a very general advice, ideally you should be the one deciding how you should act. For that you will need to analyze the situation carefully and make the decision towards latest the dawn of the first ten-day period.

In regards to the sphere of personal relationships, Venus will confidently aid you in all beginnings. Wrong directions will fall away themselves towards the end of the first ten-day period. In your relationships with friends, some defining moments will come up. With those who are truly dear o you, and to whom you are dear, the relationships will just strengthen. Not just by themselves, but as a result of some events that you will have to live through together. Obviously, they will not be trivial, but do not worry - everything will be alright and you will not have any problems. However, if you display outstanding cowardice or a tendency towards self-serving attitudes then perhaps a whole different result awaits you. Neither the people nor the stars trust hypocrites and the petty. With that, if needed then review your life priorities and worldviews, otherwise you will face problems. Not just now, but in general. In the relationship with your lover you may expect progress in September. It is very likely that quite soon you will have to prepare for a wedding, or your family will grow. Be ready for that, as even the most positive things can cause an imbalance in one's life for a long time.

Your words and advice have proven scary accurate! Didn't honor Creation's warning last month and I'm still recovering. No doubt I will take it to heart this month...
[Reply] [Reply with quote] [Cancel reply]