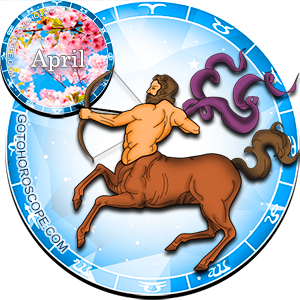 For the Sagittarius, April 2015 might be a very complicated life stage, despite the fact that the representatives of this sign will have quite a few strong supporters among the celestial bodies of the Solar System. For example, Venus - the planet-exalt of Sagittarius, which will be a danger to most signs this month, will not deny its traditional status and will provide the Sagittarius with confident flows of life energy. This is quite a positive aspect, which will allow the representatives of this given sign to fully screen through the feeling sphere of their lives to get rid of any problem. At the same time, Mercury - the main antagonist of Sagittarius responsible for the expulsion of this sign will play the role of the "celestial leader" of the Fire trigon. You will have quite an interesting situation, because the sphere of business for this sign will be under the influence of Pluto and despite all of his positivity, Mercury will not be able to overcome the negative emanations of the dark planet. With that, when required Mercury will always be near, so a Sagittarius may always hope for his support, even though the lion's share of the work will have to be done by themselves.

In this way, the sphere of entrepreneurship and business is unlikely to bring serious victories to the life of a Sagittarius in April 2015. Pluto will try hard and towards the middle of the first ten-day period, you will feel how the world is turning against you. Of course, this is a metaphorical statement, but you should have your guard up - even in your relationships with colleagues and partners. For those who have their own business, this will be the key moment. You should try to find your allies as soon as possible and realize who is not among them. This will allow you to avoid many caveats in the future, even though the complexity of the moment may be that a traitor does not even exist. In that case, the heart of your problems is you and you will have to work hard to truly realize that and to perform the necessary transformations. If you do not have your own business, then as was previously noted - focus your attention on your colleagues. Just remember that the most vivid enemy is not always the most dangerous one. Do not forget to fulfill your responsibilities; otherwise, you might face trouble with your management. Mobilize and step forward with no fear, with no haste, instead accounting for every aspect of the situation.

The sphere of personal relationships should be much less problematic for you in April 2015. Despite that, you will have to try hard to avoid complete conflict with your lover, close ones and friends. You need to separate yourself from them and do not take accusations seriously. Certainly, you will have to filter information and dependant on your success will be your family happiness. Pay attention to one very important fact: Not even one of the negative celestial objects of the Solar System will affect this sphere of your life. Therefore, all of the current events are fully objective and their causes are only you and other people around you. This is a unique chance, so use it. Self-critique will bring you the most benefit, especially if you have previously not had the tendency to resort to it before. Evaluate your words and decisions as objectively and harshly as possible, project them to various situations to achieve objective results. If you found a problem - then solve it as soon as possible, right now you have everything that you need to do so. Also, pay attention to your children (if you have them), they might be in need of your help right now.