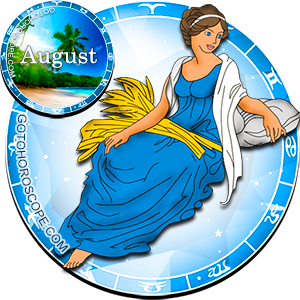 The zodiac sign of Virgo will receive a mass of advantages comparing to their opponents in August 2015. Finally, the Virgo will be able to realize all of its projects, even old and forgotten ones - with the help of the stars. We should first not the influence of Mercury, which traditionally plays the role of planet-ruler and at the same time planet-exalt of the sign of Virgo. Due to its stable position right now, Mercury will be able to significantly raise the intensity of his energetic flows, which will manifest in people born under this sign noticing an upsurge in productivity and a rise in the overall life tonus. At the same time, all kinds of worries and small problems will not have any meaning for the Virgo, since the influence of the Ruler of the Celestial and Earthly Trade Ways will neutralize such nuances in the shortest moments without the interference of the person himself. Venus, usually responsible for the fall of the Virgo sign, will change the modality of its energy flows due to some interstellar combinations, and so instead of the negative influence the Virgos may hope for powerful support in the sphere of personal relationships. Neptune, responsible for the expulsion of this sign, will be strong - but not enough to overcome the energy of Mercury, so his influence will be minimal.

The sphere of entrepreneurship and business in August 2015 will be a successful and a great direction for the sign of Virgo. Certainly there are a few nuances that you should pay attention to. During this month you have the possibility to resolve any, even the most complicate task, connected with your professional orientation. If you wanted to start your business for a long time, then right now is the best time to do so: all of the circumstances will fall right the way you want them to and no one will be capable of stopping you. Moreover, since you need your financial resources you will be capable of double downing your expenses. It is likely that you will not see a similar moment in your life for a long time. However, we should note that if you will not be realizing your opportunities, then your inaction may cause an avalanche of problems. That is why the last summer month is the worst time for relaxation. You should also note the fact that if you are not working according to your specialization, most of Mercury's positive influence will be blocked by the emanations of Neptune.

The sphere of personal relationships will bring the Virgos many interesting things in August 2015. Starting from the very first days of the month, you should seriously reconsider your relationship with your lover, especially is the necessity of such actions has been felt for a long time. With time, it will be harder and harder to resolve this problem, especially if you know that you should act anyways. That is why it is better to act now. Venus will attempt to negate the negative outcomes of your actions to the best degree possible. Of course, everything depends on the scare, but right now everything will be simpler and easier than in any other time. You should not pay special attention to those problems that are arising in your circle of friends. Someone may think of these problems as truly important, but the stars recommend that you maintain neutrality. This is not your war. Moreover, everything will definitely get better by the end of the month. In terms of your relationship with your close ones, the stars do not provide any recommendations, which means that you will be able to resolve any problem by yourself.