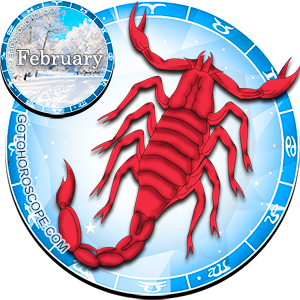 The representatives of the zodiac sign of Scorpio will find February 2015 to be a stable time, even though it will not be without its peculiarities. The exalt of Scorpio is Saturn and he will give his protege a practically absolute defense from the attacks of Venus, responsible for the expulsion of this sign. At the same time, the Moon - responsible for the fall of Scorpio, will change her negative emanations to a powerful positive influence, since in February she will become a "celestial leader" of the Water trigon. This is good news, since Mars, which is traditionally the ruler of the Scorpio sign, will change the direction of his energetic impulses. Saturn will be able to block them only because he will get help from the Moon. As for the rest, the Sun will have a secondary influence on the sign of Scorpio (first ten-day period), so will possibly Chiron (second ten-day period), and maybe Pluto (third ten-day period). As a result, the sphere of personal relationships will be subject to the greatest risk, even though it is obvious that the sign of Scorpio will not experience an influence this month that he will not be able to overcome by himself.

One way or other, but the sphere of finances and business for Scorpio will be quite positive in February 2015. You will most likely be capable of raising your profits, especially if you have your own business. You will not even have to try as much, you will just have to focus on your main goal and then solve all your problems in a consecutive manner, the way they are prioritized relative to your goal. Listen to your colleagues, right now one of them may very well give you very useful advice. There is nothing supernatural, but it may very well allow you to come closer to finishing yet another project. If you occupy a management position, then try to optimize your technical work as much as possible, at least the work in the sphere of your competency. The importance does not come from the electricity suddenly turning off in the office. The thing is that getting rid of small mistakes in large quantities allows you to come to higher results. Do not even think of lying to your partners. Currently someone may offer you exactly this, the stars pay special attention to this fact. Do not follow provocation and be attentive.

In terms of the sphere of personal relationships, in February 2015 the Scorpios may figuratively speaking fall under the blasts of their own weapons. This means that they need to be especially careful with what they say and to whom. You may even offend your best friend by accident. Of course, he will not say anything to you and will likely forget about it immediately - that is why he is your friend. However, this happening will not reflect positive on your relationship. It's a trivial matter, but even more serious situations are possible. It is about them that the stars are warning you about and recommend that you listen to your own heart, since the mind can be mistaken, while emotions are always sincere. In your relationship with your lover you need to be more careful with what you wish for, or precisely how you implement what you desire. There is nothing worse than to offer a person something that they want to deny, but due to some certain circumstances must be forced to accept. Think about that, just put yourself into another person's shoes. If you are alright and do not feel any repulsion, then you are doing right by your conscience and nothing is your fault. Yet you should be careful, do not take what you wish for as what is.