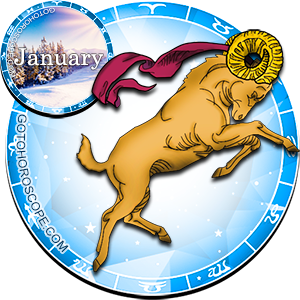 In January 2015, the zodiac Sign of Aries will not be in the simplest of situations due to its allegiance with the Fire element. On one side, the planet in which this sign lives through its exaltation (read: energy climax), which is the Moon, will also become the "celestial leader" of this Sign. This means that Aries will receive double the support on all fronts. On the other side, his planet ruler - Mars will be in an aggressive phase and instead of positive energy will provide the representatives of this sign with negative emanations. Venus, the planet in which this sign lives through the phase of expulsion, will be quite neutral from the energy point of view. This fact will certainly reflect positively on the emotional sphere of the Aries' lives. With that, the negative emanations of Pluto, the planet in which Aries lives through its fall, will be compensated by the general energetic feeling of this celestial body during the current time period. In other words, the Sign of Aries will have to pay special attention to the sphere of finances and the business relationships, while everything will have to be alright with their family (excluding some nuances, which will be talked about below).

In regards to the sphere of entrepreneurship, in January 2015 the Aries will have to try to make an effort to get what they want. Mercury, the main celestial ruler of this given part of life, will focus on the trigon of Earth, allowing Mars to manipulate this area freely. Mars will be in quite a negative inclination towards Aries, so do not wait for all your plans to come true by a wave of a wand. If you decided to find some rest in January 2015 and go on a vacation, then know that this is not the best decision. Of course, the vacation will go well, but once you come back you may find that your business seriously lost in potential profits, while some previously realized technologies suddenly became non-viable. Right now, in order to achieve the desired results you need to be attentive. No matter how banal it sounds, all of your working time should be allocated for work and nothing else. Do not be lazy when checking some data one more time and overall follow the principle of "trust but verify". You should be everywhere all the time, this is especially relevant to the Aries that do not have their own business. You should not make management upset, it is best that you stay busy and stay visible.

In regards to the sphere of personal relationships, then as previously stated, Venus will be neutral towards you so you will be able to successfully avoid her negativity throughout the month. At the same time, the support of the Sun will provide you with a bright, exclusive influence, especially during the dawn of the first ten-day period of the month and the dusk of the second. However, towards the New Moon (January 20) your libido will literally reach its peak. This means that you will receive special charm this month. If we are talking about a lonely Aries, then this is a great chance to fix your relationship with the person you wanted for a long time. Family Aries will receive an opportunity to discover something new in their relationships and this may have far-fetched consequences. You should not aim to control all and everything. The world is too complicated to always consider the maximum of all factors. Just enjoy life and do what you think is the only acceptable and correct thing to do. Your conscience should be the measure of all your actions. Currently you are acquiring unique empathic abilities for a short period of time, but soon these capabilities will pass, but the results of your actions and decisions will always stay with you. So think first, before you do something.