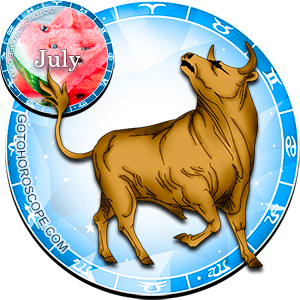 July 2015 will seem to be a harmonic life stage for the zodiac sign of Taurus, mostly positive, but not without the appearance of problematic situations. First, you should note the position of the Moon, the traditional exalt of Taurus, which in its usual position will be significantly reinforced due to its general position. In the end, the representatives of this zodiac sign will achieve a powerful influx of life energy and quality support that will touch all areas of their lives. The influence of Saturn, usually responsible for the fall of the Taurus, will suddenly change its direction and the Ruler of the Celestial Rivers of Time will turn into a trustworthy ally that will block negative emanations on the financial side throughout the entire month. Venus, the planet-ruler of this sign, will maintain its classic position and will try to make it so that the Taurus feels itself calm and cool on the love front. Pluto, responsible for the expulsion of Taurus, will be the only celestial body of the Solar System that will emanate negative energy upon people born under this sign. It is likely that this influence may result in small problems that may occur in the sphere of emotions and feelings.

The sphere of entrepreneurship and business will bring the Taurus many opportunities and sudden surprises in July 2015. Be prepared that during the first ten-day period of the month, management will suddenly offer you an original project. Evaluate your strength and think hard whether to take it or not. Denying it does not mean failing, if it is an objective decision. Right now you should not make mistakes and you still have a chance to display yourself, however, a senseless denial of the opportunity based on indecisiveness or an incorrect evaluation of your capability may bring peril. In the second ten-day period of the month you will find an excellent opportunity to strengthen your financial position by participating in some business affair. It will not be connected with your work, but you should make a decision once again, considering the fact that the matter is risky. The third ten-day period will be quite stable, especially if you focus on the realization of your current projects. If you have your own business, then think about making new deals, carefully evaluate all of your risks and opportunities that you can take out of this planned partnership.

As aforementioned, the sphere of personal relationships will be under the protection of Venus in July 2015, a sly and treacherous, but an energetically strong planet of love. Be careful what you wish for! Right now you will have the ability to implement any fantasy, but think - maybe fate did not give you this chance before so that you can realize the real reasons and consequences behind such actions? The problem does not necessarily lie in you. Perhaps someone from around you does not influence you the right way. Think about it and do not make exceptions for anyone. As soon as you understand who we are talking about, resolving the problem will be quite easy. As the ancients said: dare to be wise. Together with that, your relationship with your lover and close ones will be very harmonic at this stage and it is unlikely that any serious arguments will occur in July. Use this time wisely, since such a chance does not befall you often. Also, pay attention to how you talk with your relatives. Perhaps, you are not always right? These are people to whom you are dear, so you should not offend them by a subjective vision.

I need to know about my new founded pregnancy. I am a worry wart, andI am only 5 and a halfweeks and I am so afraid something will happen due to my age. I went into the docs to early and so it is to soon to tell anything about my pregnancy. So far I have had no indication that something is wrong it's just me and who I am, I worry about EVERYTHING!!!!! Any Advise
[Reply] [Reply with quote] [Cancel reply]
muruganandam 2015-07-14 08:07:02

I am attending multiple interviews but not getting results - they are getting hold in the final stage. As per the astrologers I have panchama shani and willbe releived by AUG end.. is this the factor - please helpl.
[Reply] [Reply with quote] [Cancel reply]
pooja 2015-07-23 04:24:23