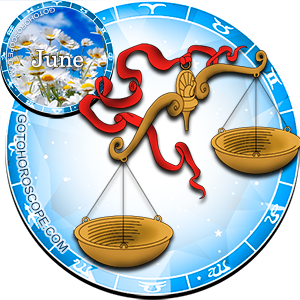 The zodiac sign of Libras will receive exclusively powerful celestial aid in June 2015. The result of implementing it may be a powerful, full-scale change of life for a representative of this sign. First, it is necessary to consider the influence of Saturn and Venus. Saturn, traditionally playing the role of planet-exalt of the Libra sign, will not be reinforced. However, his standard emanations will be strong enough to help the Libras overcome surrounding circumstance in all cases. Venus, the planet-ruler of this sign, will play the role of the "celestial leader" of the Air trigon this month, which is why her positive influence will be strengthened. In reality, these two planets will be enough to fully protect the Libras against any negative influences. However, Mars - which is usually responsible for the expulsion of the Libra sign, will change the modality of his emanations and will focus his influence on the sphere of personal relationships. At the same time, the Sun will take on the sphere of entrepreneurship, despite being responsible for the fall of the Virgos. As a result, this month will be exclusively positive for the representatives of the sign of Virgo, despite the external circumstances.

Speaking more precisely, the work direction of June 2015 will grant the Libras some unique capabilities. Overall, everything will go the way it should.

If speaking more precisely, the work direction will grant you some unique opportunities in June 2015. Overall, everything will go the way it should and you will not encounter as many significant situations as you could have imagined. However, each one of these situations may have a special influence on your life, or precisely speaking - your career. That is why it would be quite silly not to act. However, even if you do nothing at all then June will overall be a positive month for you. If you do decide to be proactive, then those around you will be shocked by the results! Towards the end of the first ten-day period, you should concentrate on the realization of a current project, especially its technical aspect. You can reach significantly higher results than you thought. If you are a line employee or occupy a relatively low position, then this can become the first step towards a promotion. If you work for yourself, then pay special attention to the event that will occur in the middle of the second ten-day period. Adequate measures will allow you to acquire a strong and a trustworthy ally, one that will boost you forward so strong that you will be euphoric for more than just one month.

On the love front, June 2015 indicates that you can wait for events that will be slightly smaller in scale, but much more important for your future. Certainly, a career and self-actualization are important, but your relationship with your second half and close ones is still a basis, without which success in other directions is meaningless. Despite the fact that any idea of yours will be realized 100% in this month, you should concentrate your life energy on stabilizing the relationships with those who are close to you. Do not spread yourself thin for those who have no important influence on you, they are not worth it. It would be better to pay more attention to your lover, especially if you are married. This period may become the best one in your life, especially if you have planned for a trip or some vacation during this month. Those who are alone can only be recommended one thing - be yourself, do not follow the crowd, do what you think is necessary, and then towards the end of the third ten-day period you will certainly find that someone who may possible change your life. The main thing is that you should be not afraid to act.