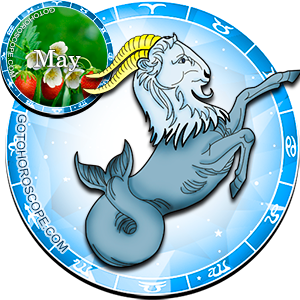 In May 2015 the zodiac sign of Capricorn will feel a powerful combined influence of the Moon and Saturn, which is why this life stage can be called fully successful. If Saturn, the planet-ruler of Capricorn, maintains its traditional positon and his positive emanations will reflect that, then the Moon will exemplify a more curious case. In its usual position, this celestial body is responsible for the expulsion of the Capricorn sign, however, this month it will be forced to change the direction of its emanations due to some interstellar factors. As a result, the Capricorns will receive yet another powerful ally, which like Saturn will provide for them in all directions. At the same time, mars - the planet-exalt of Capricorn, will deny playing his role, so the people born under this sign will certainly lack energy. This is not the worst case, since at least Mars will not be bringing any trouble himself. Yet in the light of absence of a celestial leader, this should be taken in consideration.

The work direction of May 2015 can bring the Capricorn many victories and success, however, you will have to try very hard since as it was previously stated - you will feel a sharp lack of life strength. Starting from the very first days of the month you will realize that you are unable to work on a full scale and resolving all the tasks in time will be just impossible. It will be very regretful, especially since it is now that you will be offered the biggest and the most profitable of projects. In any other time you could have grabbed all of the offerings and finish most of the work towards the end of the month. Yet doing that now would mean digging your own grave. Do not even think of risk, you will certainly lose if you do. The final decision is up to you, but the recommendations of stars are quite evident. If you have your own business then try to settle for less, otherwise you will lose more. Be attentive and careful, especially in business talks. If you have the ability - move the decisions on the most important issues to next month, this will allow you to gather all the strength you need. If you do not have your own business, then do not aim to assume more responsibility. You can do practically anything, but right now is not the best time for such experiments. Just do your thing.

The sphere of personal relationships will end up being a much more stable direction for the Capricorn in May 2015. At least, there will be much less temptation on this front, so spreading out your resources and efforts will be simpler. Do not plan for some massive trips with friends or a vacation with your lover. If such plans already exist, then ty to change them as soon as possible if you want to avoid a slew of health and other problems. It is best that you limit yourself by local amusements, such as going to the theatre. Right now you should pay a special attention to developing your soul, this will make you stronger and give you an additional source of energy. In your relationship with relatives, be as diplomatic as possible - but do not bend. If you will be offered interesting initiatives, you should not agree to join - you are not in your best form right now. So try to relax and take it easy, this is a time of rest, a time of peace and harmony. Do not worry about work issues, you will certainly witness these issues passing and you will regain your strength, do not worry. Everyone needs a rest sometimes, even if that rest is not planned.

May 2015 monthly Horoscope for 12 Zodiac signs