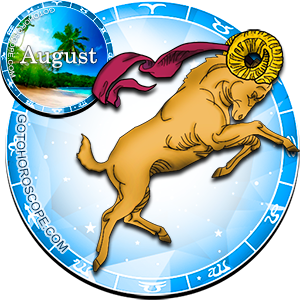 It's rather odd but Aries in August of 2016 will be almost the sole representatives of the celestial system whom the stars will shower with special "bonuses" that are not in the working direction. It's true that Venus, which is traditionally responsible for the "expulsion" of the zodiac sign of Aries, will now change its rage into mercy and become your main ally (despite its planetary status) along with the Sun, which, of course, will keep serving as your eternal light and will perform functions of your exaltation. Unfortunately, Saturn, responsible for the "fall" of Aries, will also receive certain "reinforcements". Yes, it'll be so strong that even Mars, the planet-ruler of your sign, will be unable to block its negative impact. However, we're not talking about insurmountable situations that you'll be incapable of dealing with, because the general energy aura of the planets will be in your favor, so that even in the most difficult situation you can definitely count on some external help. Thus, try to pull yourself together and don't get discouraged if you don't succeed at first, although now it is very unlikely and you should be geared towards a total success. But at the same time, proceed carefully, as they say, you can rely on the stars, but still shouldn't makeģ a fool of yourself!

Your working area in August of 2016 may not seem as dynamic as you would like. But it is only an impression, an illusion, behind which you'll find a stable, harmonious, streamlined process or a whole range of processes that guarantee you an absolute victory in any "battle". At the same time, nothing suggests that these "clashes" will actually take place. Now the pace of your work will please both you and your management (if there's any), and minor shortcomings that might "blur" the big picture a bit, won't produce any damaging result. So you should keep moving in a set rhythm, no matter what. There is a slight danger that someone from your working environment (probably a colleague who you've known for a long time) will try to "harm" you a little, most likely, unintentionally. What you can do about it is a rather complicated question. And it'll be much harder to find an answer to it than to find the source of your problems. Nevertheless, it's essential to work out a solution of this situation before the end of the second decade, because if you fail, you'll lose momentum and won't be able to play a dominant role. If you work for yourself, think about the expansion of your business. This is a good time not only for planning, but also for the implementation of the most risky ideas.

The "love life" in August of 2016 will press the most painful points of Aries. But all this, oddly enough, will have only a positive impact on you. You'll suddenly discover in the world around you (meaning in your cohort: family, friends) something so new that it will fundamentally change your worldview. Although here again we need to make allowances for personal and individual traits. After all, we are all different, and therefore, the same event can affect us, on the one hand, in the same manner, but to a radically different extent. Do not be frightened of your own feelings, think of it as a kind of spiritual evolution. Try to explain everything to your significant others, and you'll definitely find some help and support there; what's more, your relationship will flare up with renewed vigor. If you are single, you will have fewer new experiences, although they will be no less bright and wonderful. Do not hesitate to tell your friends and relatives what you've "discovered" and what you've "reached." Your spiritual experience is not only the most important but also the most unpredictable one and, in general, without any hint at negativity.