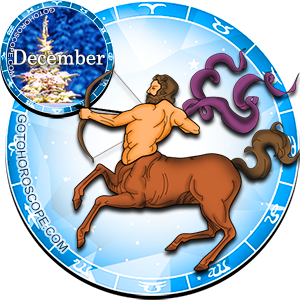 For those born under the sign Sagittarius, the representative of the mutable cross of the fire trine, the final month of 2016 may be a very volatile time, but not necessarily negative. Venus, the planet exultation of Sagittarius, will be in a sufficiently favorable and strong position, allowing for the forces of life to excel for the representatives of this zodiac sign. At the same time, Mercury, in its usual position responsible for the "exile" of Sagittarius, will not fail to hinder you in the implementation of your plans, and this point will affect not only the working directions. In general, it is fair to say that in December Sagittarius will find themselves in some rather difficult dilemmas, which is likely to be considered "fundamental", and not only for themselves. It is also worth mentioning the fact that the emotional sphere of your life will be under, let's say, a high influence from all the celestial objects of a classical order without an exception (in regards to the sign of Sagittarius, of course). It means that you have clearly, correctly and comprehensively analyze your own experiences, and under no circumstances make hasty decisions.

In the area of entrepreneurship and business, for those born under the sign Sagittarius, December of 2016 can be quite a successful time, but it is worth making allowance to the volatility of the energy background. That is, on the one hand, you will work out all of what you decide to take on, even if a project goes far beyond your competence. You will quickly learn to comprehend the necessary experience. It's okay if you don't achieve the desired results the first time around. Focus on the problem and move toward it, regardless of the circumstances. At the same time remember that really unimportant moments do not exist. Each individual situation is valuable at least in terms of experience, so everything fits philosophically, in particular with regard to losses and unrealized projects. On the whole, if you work on yourself, try not too much "coordinate" what is happening; it is better to reduce your work pace, and to keep a sober and unbiased mind. At the end of the year this is much more important than the results, at least in relation to your sign at this particular time moment. If you work for someone else, everything will be a bit easier; you don't have to focus too much of work. You should do as you are told, but not blindly, but let's say, thoroughly.

The "love front" in December of 2016 will bring Sagittarius lot of experience. But this issue should be approached quietly and without unnecessary emotional outbursts. If you suddenly come to the conclusion that you need to break off your current relationship, do not rush to do so. Once again, analyze the situation; now your feelings are definitely not deceiving you, but you may be in the wrong mind, and the facts actually may not be quite so immutable. At the same time would be a real mistake to seek help from your friends, because they don't possess even half the information necessary for a proper analysis of the situation. Be attentive to your immediate environment; perhaps you will be able to find a solution, relying on someone else's example. In any case, in each separate case the situation will develop uniquely. It is never too late to stop and think, but you can't always change your current position.

I'm going through her it is written exactly samethng in relationship.I'm with Capricorn n he is very narrow minded ....dnt knw how to tolerate
[Reply] [Reply with quote] [Cancel reply]
Maria 2016-11-16 19:23:14

Maria- I don't know. I think I like the mystery about him, we have good conversations and he makes me feel good. All my life, I've only been attracted to either Leo or Aquarius males. Sexually, this Aquarius male seems to be the only one who can spark up the fire in me.
[Reply] [Reply with quote] [Cancel reply]
Barbie Garcia 2016-11-08 15:47:22

I love being a Sagittarius. Now, I need to figure out how to woo that Aquarius male in my life.
[Reply] [Reply with quote] [Cancel reply]