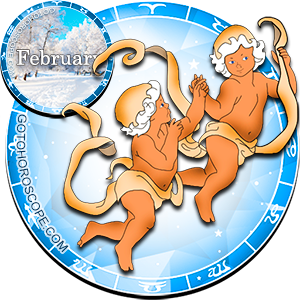 The zodiac sign Gemini will get lucky twice in February of 2016. The first time will be related to the fact that Jupiter, which is traditionally in charge of the "fall" of Gemini, will exert key impact on the representatives of this sign throughout the entire month. The second time, with all sarcasm put aside, will be when your back will be covered by Mercury, playing the role of the ruler of this zodiac sign and whose influence will be repeatedly reinforced by general stellar combinations. We should not forget that the Black Moon will be on the side of the leading sign of the air trine and it is likely to neutralize the majority of the negativity coming from Pluto, which decided to annoy Geminis in the last month of winter as well. As a result, Geminis will find themselves in a quite complicated and ambiguous situation. It should be noted that it's best for Geminis to avoid any large-scale events in February and not to plan anything really important or fundamental at this time. However, if it's too late to cancel your long-drawn plans, you have to be extremely careful and call upon all your will and concentration. It certainly won't be a piece of cake, but if you do everything on time and are responsive to the slightest changes in the environment, it is quite possible to survive this month not only without a loss, but with a definite victory.

In terms of business, February of 2016 should be a relatively quiet time for Geminis. It is highly unlikely for you to come across some kind of dynamic and vibrant events. Even the signing of especially major contracts at this stage will not bring about exceptional consequences. Perhaps some things will not meet your expectations, but nothing bad will happen. Mercury will help you to correctly allocate your resources and choose the right path for the implementation of a set strategy. In this respect, there will be a little more luck for those who have their own business. These people will have a large number of options for the development of their business and each of them will be good in its own way. Geminis who hold managerial positions will have slightly fewer opportunities, and, so to say, ordinary employees won't have a chance to step away from the line of action designated by the management. But even this can't be viewed as a fundamentally negative point, so it is enough to stay true to yourself, mind your primary tasks and ignore provocations on the part of your opponents. And one more thing, avoid "signing up" for third-party projects. Don't hurry, as now you don't have the necessary resources, and instead of gaining more profit you can lose your current position.

The sensually emotional sphere of the lives of Geminis in February of 2016 will be a little less bright, but quite picturesque compared to your work. The term "picturesque" in this case refers to the large number of events that will be of no fundamental importance for you personally, but the quantity will more than compensate for the "quality". Various situations will be rotated in a kaleidoscopic manner, but no need to focus on them. Your best option is to devote all your free time to your family. This time will be really important, both for you and for those dear to you. Besides, the Black Moon will shower your "love life" with a couple of unexpected bonuses. Perhaps single Geminis will finally find their soul mate, and those who are lucky to have one will discover something new in their relationship. In each particular case things will develop very individually, but in general February will go by in a rather calm and harmonious manner, without any overly adverse moments.