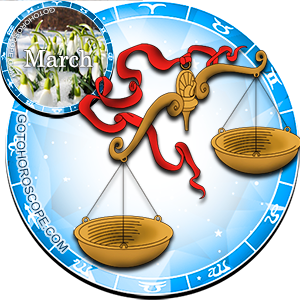 The first month of the spring of 2016 for the zodiac sign Libra can be quite interesting and dynamic, and especially successful in the working field. And we need to thank for that, among other objects in the solar system, our permanent ruler, which in its normal position is responsible for the "fall" of Libras, but at this stage will replace its negative emanations with quite positive, though not especially dynamic, influences. At the same time it is impossible to overlook the position of Pluto, which is generally not the most, so to say, "trustworthy" planet, but in March, its position will be, no doubt, quite favorable; Pluto will become an entitled "heavenly leader" of the air trine for the whole month. As a result, Libras will be able to shield away any external negative influences, and even if some problems arise on your way, their root will be hidden either in you yourself or in your immediate environment. Nevertheless, some really significant conflicts or dilemmas are out of the question, so you should be confident in your abilities and move bravely in the direction of conquering your desired heights.

In terms of work, March of 2016 will provide you with a unique opportunity. The current period will show your working team in a new, quite unexpected light. It is difficult to say how negative or positive it will be, but the fact remains that you'll be seriously astonished. Obviously, you will need some time to get used to this new information, but under no circumstances allow any external moments to influence the course of your workflow. Learn to distance yourself from other people's problems and by no means lower the level of your concentration and attention to detail. If you manage to accomplish all this, then you are unlikely to observe even a slight drop in your work pace. On the contrary, by using little tricks, even the most banal and most harmless, while dealing with a problem, you will be able to obtain an exceptional advantage in your struggle for "a place under the sun". But be careful not to cross the line! "Walking over peoples' heads" is the worst case scenario, which will lead to nothing good. Stay true to yourself and do not rush to accept someone else's point of view, even if you think really highly of this person.

Your "love life" will be much more stable, and in March of 2016 you'll feel in total control of all situations. If you find yourself in a fierce dispute with friends, you should be one hundred percent certain in your abilities; you will easily convince your colleagues that your points are not only undeniable but etched in stone. The same will apply to possible dilemmas in your family. Do not hesitate to take initiative in your own hands, especially if you possess full information on the given subject and are ready to solve the problem, clearly aware of the potential liability. Your relationship with your significant other will be a little more delicate and refrain from resolving any complex issues immediately in a "straightforward manner". This is especially true about men who in March may become too "dazzling" and hot-blooded. It is better to hold your horses and give the situation an opportunity to develop in its own course. You can intervene at any moment, but calculate precisely the time when it is best for you to go into action. Remember that although your feelings should be your guiding light, in this world of raging passions reason should always be your objective deterrent, without which your actions can easily lose their value.