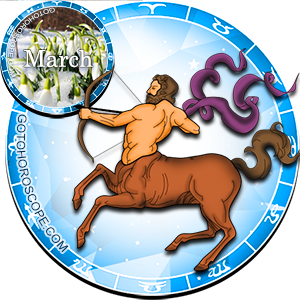 The final sign of the fire trine, Sagittarius, in March of 2016 will not feel very confident, although the overall energy levels of the current period for people born under this sign will be quite positive. The fact is that Jupiter, the planet-ruler of Sagittarius, due to the nature of its current position, will alternate between the role of ally and villain. It is not difficult to guess that when your main astronomical patron, figuratively speaking, is torn between two fires almost every day, bouncing between the urge to fuel your energy levels and the desire to suck your energy as a vampire, any situation can unfold in a rather unpredictable way. Fortunately, Venus, which has traditionally played the role of your exaltation, will preserve the stability of its position, and nothing big will threaten you. Most likely the first month of spring will turn out to be a quite calm life stage for you, not without a series of problematic situations, but generally fairly stable. And if you decide to stay strong no matter what, your chances of surviving this period with minimal losses will significantly increase.

In terms of business, March of 2016 will appear as an overtly "linear" stage. This means that even with a strong desire you are unlikely to deviate from the "standard" course of actions. If you are not self-employed and do not occupy a managerial position, then you should hide your initiative in the bottom drawer and forget about it for a while, because this month you are unlikely to implement any planned projects. Now the whole world will be waiting for something, and you will have to share this moment too. Therefore, it is logical not to waste your resources, being aware of the slim chances for success, and save them for "better times". Take it easy if something does not work the way you want it; pull back and regroup. You are bound to reach your goal, but, most likely, in the long term. And during the period of stagnation, though relative, you can devote your time to other problems, which have long occupied you. For example, when it comes to business, you can try to improve relations with your colleagues or partners.

In terms of personal relationships, things will develop much better now, so it makes sense to focus more on this area. The main thing is not dwell on problems that you repeatedly fail to solve. Leave them and come back to them later, after you reconsider your point of view, or even forget about these problems. Giving a problem a "fresh look" while proofreading will be a great way of solving your issues.