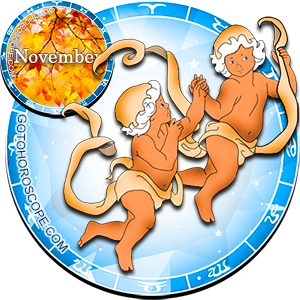 For Geminis November of 2016 may well turn out to be though not a stable but definitely bright and productive month, in the first place in the working and financial direction. Many celestial objects of the solar system will now have a quite powerful impact on your sign, but it is logical to define only two pivotal vectors. The source of the first one will be Venus, which is in its normal position responsible for the "fall" of Geminis. However, at the current moment due to the peculiarities of its planetary position the celestial priestess will replace the modality of its energy flows, and will be in clear collaboration with Saturn, your traditional exaltation. But Jupiter, which will be the source of the second energy vector, will not be as generous in terms of beneficial influence, therefore, it would be nice to defend yourself against its "attacks". But, as usual, it is easier said than done. Although in general we are not talking about any foundations or truly defining moments that can instantly change the course of events. If negative aspects manifest themselves, you will be able to see them in advance and to fully assess all the risks, so in reality there is no reason for significant unrest.

In the working direction in November of 2016 Geminis will reach the moment, which in literature is called "a time for all things." And although it is too early to talk about the completion of all the current projects, it's foolish not to mention that you're extremely close to this line, which means you need to increase your concentration and focus on priorities. Now the dynamics of the working area will be particularly high, but it will neither knock you off balance and nor take you by surprise, you will be ready for it in full. Therefore, from the very first days of the month you should dive into the battle without turning back; try not to be distracted by external moments and strive to keep your fuse by all means. You will not go astray if you know exactly what you want. Another interesting point is that in view of the current characteristics of your astronomical protection your direct actions will be the most productive, devoid of contexts, inside information, "backstage" and unofficial "intrigues". The more openly you act, the more quickly you will reach the desired goals. But under no circumstances should you act in the way others do, your competitors, in particular. Your path to victory should be individual to the maximum extent, and any deviation from this thesis will be extremely detrimental for your business.

In the area of personal relationships, Geminis will need to follow the same rules in November of 2016, in the sense that the most productive results will be brought about by non-standard, extra-ordinary actions that are out of line with the customary course. Do not worry if something doesn't go the way you want it the first time. Now the intensity and perseverance in the "affairs of the heart" will be the key to productivity. The idea is that it is better to try to, metaphorically speaking, hurriedly take the fortress several times in a row rather than sitting still day-to-day and only assessing the possible courses of actions. Act first and evaluate the results afterwards! This is exactly what your "sweetheart" will require from you now, actions and nothing more. In relationships with your family and friends you will need to display maximum straightness and readiness for actions in order to resolve conflict situations. In no case should you "roll into metaphysics" and "breed new concepts ", to be more precise, you should try to think as less as possible, no matter how strange and ambiguous it may sound. November of 2016 should be an extremely active and dynamic time for you. For you, this is a real chance to obtain the cherished goals in the shortest time possible and, as they say, in the best possible way.

The first girl is no longer of use - she is ugly and butters
Your cousin 2016-10-30 02:29:55
👍 +2 👎
[quote]Message from Manu
Keep the trend bro love your style - wish I was like you and had my libido satisfied like urs - cousins, friends , ex wife's others girls - you the real alpha male James Bond shit what a slick fluid swagger mojo you have bro