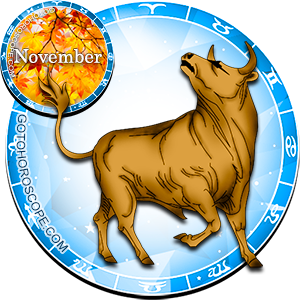 Representatives of Taurus, the leading zodiac sign of the earth trine, in November of 2016 will find themselves in a fairly stable position, though a bit ambiguous. With this being said, the ambiguity of this moment will depend primarily on the position of Venus, which in its normal position is a planet-ruler of this sign. In November, Venus will retain its classic position and at the same time will receive an additional reinforcement due to some planetary combinations. A similar situation will be in place on other fronts, in particular, regarding Pluto, which usually plays the role of the planet responsible for the "expulsion" of Taurus. The exaltation of this sign, the Moon, will retain its position, as well as Saturn, which is responsible for the "fall" of Taurus. In fact, the influence of these two celestial bodies in the solar system (the Moon and Saturn) will completely compensate each other, so it makes no sense to pay any attention to them. It is better to focus on relevant issues, on the tasks that will be of decisive importance for you. And although in this case everything will be highly individual, it is fair to say that in the first ten days of the month you will be able to clearly define not only priority in your work, but also the key issues that you'll have to deal with.

With regard to the working direction, some changes will await Taurus in November of 2016. How significant these metamorphoses will be is a different question, and you'll have to try hard to respond to it. The stars imply that now your efficiency and speed in decision making will be much more important than rigorous and consistent analysis. Under no circumstance should you put your responsibilities on others, especially if you are one of the so-called "bosses". In order to succeed, you'll need to, as they say, roll up your sleeves and get your hands dirty a little bit. If you're not ready for this, a successful finale of the month will be out of the question and out of your reach. November will not bring you any large-scale significant problems, but this month you are sure to encounter situations that will become a fundamental starting point and foundation for your business. And it is important here not to wave off new opportunities and not "get stuck" in the quagmire of old and outdated directions and trends. Remember, there can be a numerous amount of opinions, but none of them should necessary have a direct bearing on the real situation.

The "love front" in November of 2016 will turn out to be calm in the full sense of this word for the zodiac sign Taurus. Here lies the fundamental difference between the sensual-emotional direction and working area (at this stage, of course). In terms of personal relationships everything will be balanced and you will not have to resort to any complex multi-step combinations to achieve the desired result. It will be enough to focus on your task and consistently move toward it, especially since no barriers and obstacles are anticipated. None at all! And it's a positive thing, the essence of which it will take you time to realize. If during the second decade you keep "stumbling" on difficulties, then you should look for the root of this problem in yourself, because neither stars nor circumstances are set to drive wedges on your road. If necessary, you should ask your friends for help, their unbiased, third-party opinion can be valuable, especially for the Taurus who "suffer" from attacks of outright egocentrism.

question about my study ?will i do my study complete in good grades ?
[Reply] [Reply with quote] [Cancel reply]