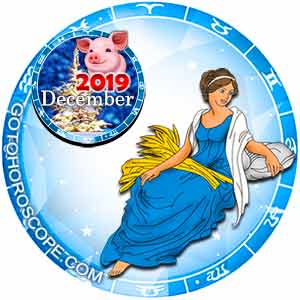 Mercury is going to be a very powerful force for you in December. On December 6th, our solar system's winged messenger is going to be directly in line with you. That's a very powerful symbol for you, Virgo, and one you shouldn't ignore. What will this mean? Among other things, this means that December is when you'll see all the hard work you've done this year - across a number of areas - bear fruit for you. The tricky thing is: you might not immediately recognize it as fruit that you can eat, just to stretch the metaphor. The rewards coming to you might be hidden, or things that you don't know yet that you want or need.

One of the best examples of doing something for rewards much further down the road would be exercise. No one enjoys the process at the moment, but we all know that it pays off in feeling better and being healthier in the future. If we're smart, we do it incrementally every day so we don't feel the work. If you've been keeping to a good regimen this year of eating right and staying active, December is when you're going to start feeling that. There might be a lightness in your step or just an added, unexpected boost of energy that surprises you. Something is going to hit you that shows that the work you've done is paying off. If, however, 2019 has not been a super active year for you and you've spent more time on the couch (not judging), then December might give you a little jolt. Nothing terrible, but you're suddenly going to face the effects of not keeping an eye on yourself. Maybe your favorite pants won't fit, or you'll get winded climbing a flight of stairs, or you just look in the mirror and all of a sudden you don't recognize the person looking back at you. That's okay. It's called a wake-up call and you should let it do its job. Get yourself off of that couch and take yourself for a walk. Then when you get back home, go to the kitchen and get rid of the snacks that are absolutely terrible for you. Today is the day that you listen to that wake-up call and start your progress towards being healthier.

Work and career ambitions will ebb a bit during this month. While there will still be workplace demands on you, the pressure will be a bit less and you might feel slightly less ambitious. That's perfectly fine for December, Virgo. Look for some future projects to present themselves around the 14th or so and make plans to focus in on them starting in January. You'll get your second wind by then. If you're thinking about asking for a raise or promotion, hold off until the following month. Careerwise, this is your time to lay low.

Your interactions with people during 2019 have sometimes been problematic. Either people haven't responded the way you'd like them to or you've felt like your connection is fraying. That means you've put in a lot more energy with the people in your life than you ordinarily would. And guess what that's going to result in? After a year of feeling like you've been giving of yourself and putting in more hours than people have for you, you're going to hear back from everyone in December and they're going to have great things to say. You see, Virgo, your efforts haven't gone unnoticed. It's just that everyone has been too busy dealing with their own garbage that they haven't had the bandwidth to properly thank and acknowledge you. No more! December is when things quiet down and everyone can say: you are important and loved. BUT (and it's a big but) it might not be said as explicitly as that. When people contact you to meet for coffee or to go see a movie, take them up on their offers. People show love in a variety of ways. There are as many ways to show it as there are people. Keep your eyes and ears open and be receptive to how your loved ones will be showing it, particularly as it gets to the end of December.