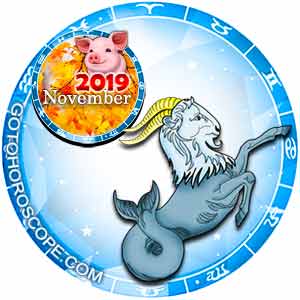 If there's anyone who doesn't need to be called to action, it's you, Capricorn. When other people are asking how high to jump, you've already jumped and you've moved to the next obstacle. You're a natural-born leader and November is the time when you'll need to put that skill to the test. Everyone around you needs a leader in this month and you seem like the perfect person for the job. Should you choose to accept this mission (and you really need to accept it), just promise that you'll pay attention and learn a bit about yourself and the way you do things.
Right at the top of the month, Mercury is opposite Uranus and the effects of this are extraordinary. The peak synchronization for this will be very early on, but the power from it will be cast over the entire month. This is a good month for ghosts to be awakened. These don't have to be literal ghosts, spirits of dead people walking the Earth. But it most likely means voices from the past that you haven't heard in a while coming to (yes) haunt you. They might very well be friendly ghosts, though. And here's the thing: what they from you is for you to lead.

Whether you're in a management or leadership role in your job or not, people are going to look to you to lead, officially or not. There's a void there which you may or may not have noticed. Maybe you've been skirting around it, hoping it will fix itself. Guess what? It won't. Roundabout the 19th or so is the time it becomes an acute problem, so get yourself to a phone booth to change into your costume. The people want someone to lead. Does this remind you of something from your past? Remember those ghosts? Listen to what they're saying.
Keep your money tight to you, Capricorn. This is not the month to be spending wildly. You're there to lead, not buy everyone gifts. And you're there to lead by example. Set an example and keep that budget tight and accurate this month. Let people see that you're not spending foolishly. That doesn't mean you have to announce every deal you find, but if possible, be flashy about not being flashy. Again, you're leading by example. Be that example. Look for some possible financial breaks coming to you on or around the 11th.

There are some prominent ghosts from your love life that have lingered for a while. November will be the month where they get a little louder. They'll do the equivalent of rattling chains, knocking over dishes, or whistling in the wind. Don't be scared. Those are just tricks ghosts play because they don't know how else to get to you. As long as you don't let them get to you, you'll be fine. But you should still listen to those ghosts because they're trying to tell you something. Whatever it is, listen to them around the beginning of the month. You haven't listened before and now is the time.

Leading by example can take a toll on the body, so make sure you pace yourself this month. Look for any opportunity to take a break and do so. You need it for the efforts you're going through. And don't hide away when you do. This goes back to that whole leading by example business: people need to see that you aren't infallible and that you need a break, too. It's okay. Everyone has been waiting for someone to sit down first, and it looks like it's going to be you.
You are practically a superhero, Capricorn. Ready for action at a moments notice, jumping over buildings in a single bound, saving kittens in trees….. It's you. But that's not necessarily the same thing as being a leader, and that's what you need to start doing: leading. By all means, perform any and all super feats if it's what the people need for them to proceed, but you may find that leading means doing a bunch of quiet work in the background to make the world run a little more smoothly. That's your mission for the month. Accept it.