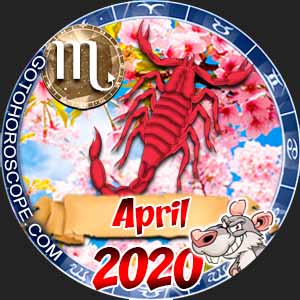 It’s time to take on the world, Scorpio. You’ve had a lot going on during the first few months of the year, but April is the month in which you’re putting your armor on, weaponing up, and getting ready to do battle with whatever forces come your way. Sounds like a lot, doesn’t it? Don’t worry, though. The past couple of months have given you the preparation you need to do battle with anything that gets in your way. You’re not going to go out looking for a fight. But you are going to fight for what you need in your life and eliminate anything that stands in your way. Doesn’t that sound better?

Luckily you have a number of celestial friends helping you out this month. Think of them as the line of soldiers standing behind you as you charge into battle. Pluto is crossing over into your house, taking Gemini with him. What does all this mean? It’s complicated, but trust that you have a line of stars standing behind you, making your enemies weak in the knees. Trust in your foot soldiers to have your back.

Your friends are wonderful and they’ve been there for you, but on some points, you differ with them greatly. Have they dismissed some ideas you’ve had or projects you’ve wanted to pursue? They have your best interests at heart, but the fact is they don’t know you as well as you know you. That’s a crucial point for you to make and it shows that you’ve got the right idea for your vision. No, you’re not going to get into a fight with your friends, but you’re going to stand up for yourself. Just like we said earlier: you’re not going to pick fights, but you are going to be ready to defend yourself.

Whatever that project maybe, you are going to want to pursue it with great gusto. Is there a side hustle you’ve been considering for a while? An artistic discipline that excites your soul? A class at the local community college that’s been intriguing you for a long time? April is the month where you start to put a plan in action to make these things happen. You’re going to have a ton of people trying to pull you away from it. Maybe not deliberately: it could be they have their own agendas and are just too busy to see the effects their actions have on you. No matter. You’re going to shrug them off and pursue what you want to. Start that business. Do that art. Take that class. Don’t let anyone or anything say that it’s not worth doing. And if it turns out to be something you don’t want, guess what? That’s right: there’s nothing wrong with stopping that and pursuing something else. Just make sure you give it a proper go. Follow that dream.

And while you’re in this fighting mood, it’s time you put it to work for the world as well. Is there a political cause or candidate that you feel strongly about? Or least you spend a lot of time worrying about it? You’re going to channel some of that warrior spirit in that direction. Look towards the middle of the month as the perfect time for you to join an election campaign or social group that aligns with your beliefs. You aren’t necessarily going to hit the street with a picket sign (truth be told, you might just be licking a bunch of envelopes), but you’re going to approach this with the same fervor as any of the other things you’re passionate about (and that’s a pretty huge list).

If that all sounds like an exhausting month of fighting, you’re right, Scorpio. It is. You’re going to make “Game of Thrones” look like a tea party by the time you’re through. Don’t be daunted by this and get tired just thinking about it. Lean into it and be energized. You’re going to charge into the burning house that is the month of April. When you come out the other end at the beginning of May, you’re going to have traveled so far and done so much you’ll surprise even yourself.