August takes the positive energy of last month and spins it into gold for you, Aries. Spontaneous connections need your talents, so start marketing your skills if you haven’t already! Inaction just won’t cut it this month – it’s time to truly strut your stuff and lead the charge. Whatever direction you find yourself careening in, the support of your loved ones provides you with all the security you need. But you’ll need to be real with yourself around mid-month. You’re not as fearless as you’d like to believe, but that doesn’t make you any less of a warrior. Actually, it’s your refusal to accept failure and concede defeat when you’re wrong that turns you into a coward. Through August, let down your defenses enough to learn from someone with a different perspective.

The Full Moon in Aquarius and your eleventh house rises on the 3rd. The eleventh house rules your friends and social circles, you may be wrapping up a group project or just wanting to hang with your buds. If you’ve been looking for a new BFF, keep your eyes open this month. Just try not to scare them off with your natural enthusiasm!

That’s not to say you should dim your light in any way, but things will be better off in the long run if you keep your cool this month.

For better or for worse, the people in your close environment are delivering shocking news from left and right. The chatter might be overwhelming, but your siblings, neighbors, and colleagues just can’t resist the full moon’s square to Uranus. Though it’s tempting to join in on the conversation, you’ll want to carry yourself above the pettiness of low-vibrational gossipers. You’re better than that anyway, Aries!

If you manage to hold yourself to a higher standard after August 4th, Mercury’s transit through Leo will crown you with a sense of regalness. Avoid acting pompous now. Seeking your thrills through barbaric ways won’t work unless you enjoy feeling like a tyrant. As the messenger planet flies through your fifth house of creativity and romance, you’re feeling more royal and affluent than usual.

Indeed, this Mercury transit brings some major profits this way – not just the monetary kind either. As long as you’re socially active and in control of your temper, influential people and prior investments bring you great returns.

Just take care that you’re speaking with your heart instead of your horns.

You might not even notice when your horns do come out. Thankfully, Venus is on your side when she enters Cancer on the 7th. All month, the planet of beauty and love graces your fourth house of family and home, so if you can’t shake the rage you might want to call up mom or dad. Even just hearing the voice of a loved one could banish that chip on your shoulder.

What you’re really searching for is a reason to be prideful in yourself. Vesta enters Leo on the 11th to remind you that your purpose can only come from the furnace fires of your own soul.

Have you abandoned your imagination or lost your connection with your inner child? If the answer is yes, August 12th is a serious reckoning. There’s a longstanding conflict between your identity and how you've been seeing professionally. Isn’t it time for you to balance out these two sides of yourself?

From August 15th through the next five months, Uranus backspins in retrograde motion through your second house. Radical changes are delivering a shakeup to your earned income, self-esteem, and possessions. Because this transit is in earthy Taurus, you might feel lightning changes in your own body. The worst thing you could do right now is playing it safe. If you aren’t ready now, you never will be – so what’s the harm in going all in and really giving yourself a chance?

Fortunately, a creative opportunity to bet on yourself comes on August 18th. The New Moon in Leo is supercharged by your ruling planet Mars, so the time has never been righter to start that business you’ve been planning or confess how you really feel to a romantic prospect.

The Sun enters Virgo on the 22nd to shine a spotlight on your routine and daily concerns. Try not to roll your eyes; once you get organized and tend to the details, your constant stress practically melts away.

As if the rest of August wasn’t fiery enough, the month ends with a first-quarter moon in Sagittarius. Nothing’s stopping you now as long as your intentions are pure. Your imagination takes charge and saturates you with a sense of adventure you’d do well to hold on to. As you approach September, there’s no reason to identify with the restrictions of the familiar. Instead, you’re immobilizing your will so the old barricades can’t confound your resurgent spirit any longer. 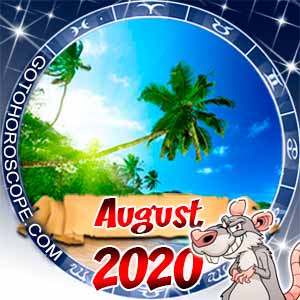