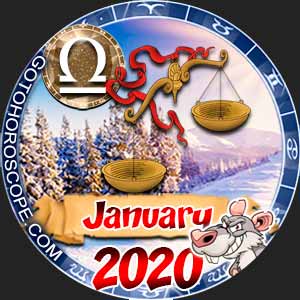 After a no-doubt boisterous New Year's Eve, the dust around you, Libra, will settle a bit and you'll be standing there waiting to make your next move. While you stand there, you'll have a number of people noticing you in a new way. Maybe it's a result of all the work you did last year, or maybe it's just the energies of Saturn casting its glow on you, but everyone in your life is going to see you in a very new light. You have two missions in January in response to this. First, you have to trust in what the people around you see and believe that you are special. And second, you need to pursue any new connections that come your way as a result of that Saturnian glow.

That means your first week in January, you need to put yourself out there. January might be a little bit of a coming-out party for you. You want to do whatever you can to make yourself visible, especially to those people who don't know you and don't know how special you are. Starting around the 3rd of the month, you're going to make it a point to get to every single social event that you are invited to. That's right: every single one or at least make your best effort to do so. This is the month where you're going to default to saying "yes" to every invitation that comes your way. This isn't to exhaust you or make you shirk your other responsibilities, but rather to jump-start you getting out there more more more. In the course of being out there, you're going to make some new connections that will help you in the months to come. And lest that sound too cynical, you're also going to make some new friends. The point is you'll be putting yourself in a good position to be noticed, and that's what you want, Libra.

While you aren't going to have any pressing health issues, you are going to want to keep an eye on your well being. Specifically make sure your weight isn't getting out of control, especially with winter slowing things down. If so, you know what to do. The 12th is an excellent time to start a new diet program.

Saturn is also going to shine his blessings on you in a very different way: you are going to be blessed in January with financial wisdom that you didn't have before. Does this mean you'll suddenly be very rich? Unfortunately, no, but you'll be closer to that possibility than you ever have before. And thankfully, that wisdom that's being bestowed on you doesn't have an expiration date, so it's something you can carry with you for the rest of your life. But how does it work? You're going to realize, Libra, that you are much smarter with money than you thought you were before. It turns out you're fairly financially savvy and you haven't trusted your money instincts enough. It's going to take the magic wand of Saturn dabbing you (and look for that to happen around the 19th or so) but then all will become clear. So what will you do with that wisdom? That's up to you. Now don't take the sudden onset of money smarts as an excuse to invest in your local blockchain startup or anything (unless it turns out it truly, really, absolutely is a good idea). But it is a good excuse to look at your finances and believe in your choices.

This will no doubt be an exhausting month for you, Libra. That last week in January is a good time for you to catch your breath for a minute and see where you are. By this point, you've probably shaken hands with dozens and dozens of people. Has your social circle expanded as a result of this? Are you encountering new worlds that previously you had no access to? Don't despair if notвЂ¦. You just need to keep getting out there and pressing the flesh. Take a couple of days at the end of January (we'd recommend the 28th and 29th) and regroup. Take stock, breathe, and then get back on that horse. This way pay off for you very well into the rest of the year.