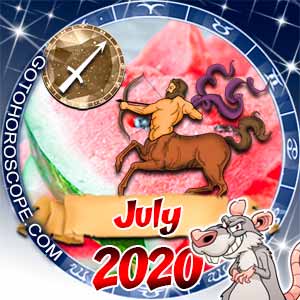 July brings unexpected depth to all areas of your life, Sagittarius. You’re usually buoyant and lighthearted, but this month you're more serious. You'll have to be if you're going to get serious about your deepest-set psychological fears. Yes, you’re testing your definition of self-worth all month. The goal is to pinpoint any wounded areas of your psyche that you may be unaware of. This might not be comfortable at first, but you’ll find your groove by the 20th, diving headfirst into a new cycle of emotional evaluation. The answers to the greater questions call your name. In response, you rack your brain for ways to relieve yourself of restrictions. This is about taking back your individual power and reflecting on how you wield it. Are toxic though patterns from your youth influencing your decisions? One thing’s for sure: you’ll have to delve deep to find out. All month, your attention is on the internal, the emotional, and the unknown.

With Saturn retrograde in Capricorn from July 1st onwards, you know no limits. The planet of restrictions moves backwards through your second house until the end of September. You might feel like your possessions are slipping right through your fingers. Watch your spending right now, as you’re prone to overdoing it and indulging in something you’ll regret by September. You’re being called to get clear on what you own, possess, and have power over.

When the full moon lunar eclipse culminates in your second house on the 5th, expect a confrontation. This isn't coming from external forces. Instead, you're taking a look at your feelings about yourself and your sense of self-worth. How much value do you believe you have? What about when you remove material possessions from the picture? You’ve been exploring this theme since January of 2019, but this final lunar eclipse seals the deal. You can wave goodbye to the Capricorn-Cancer axis and this year-and-a-half-long cycle – at least until 2027.

You could be making a final payment or wrapping up a financial project in the first week of July. It’s even possible you’ll experience an unprecedented change in earnings. Whether that’ll be a good change or not depends on the work you’ve put in since February.

External situations may be wrapping up, but your internal journey is just beginning. As asteroid Ceres stations retrograde on the 7th, you explore the depth of your love. In your fourth house of family and home, you might find your dreams require letting go of a comfortable foundation.

It’s not all bittersweet news though, Sagittarius. Saturn’s month-long presence in your second house rewards you with financial prosperity all July. Despite this, you’ll need to plan for delays and triple-check all the details, especially before the 12th. Until this date, retrograde Mercury is inclined to miss a few things in your eighth of joint resources, loans, and hidden things. Practice due diligence, and you can save yourself a lot of disruption at the beginning of the month. At the very least, give written documents a brief second look.

Around the 11th, you might encounter some blocks in your sector of creativity and romance. Thanks to the Wounded Healer Chiron’s retrograde in Aries and your fifth house, you’re being tested to release some old identity wounds. It’s time to revisit uncomfortable childhood memories and clear up any residue they’ve left.

From the 12th through the 20th, you excel at research and digging below the surface. This is an auspicious time to get in touch with all the hidden aspects of yourself as you’re unlikely to take anything at face value.

A psychological revelation may be in your cards around the 20th when the New Moon in Cancer starts a new lunar cycle for you. You’re attracted to taboo subjects such as life after death and the occult. You may even make contact someone beyond this realm if you’re into that sort of thing.

Alternatively, you may find you or your partner are subject to some sort of investigation or great injustice. Knock out the stress by giving some TLC to your sex drive and delving into intellectual pursuits. As long as you don’t let your obsessions or fear of mortality run the show, your blooming subconscious will pave the way for brighter days.

Indeed, things are looking up just a few days later when the sun enters your ninth house – your domicile. You can expect a boost of energy and possibly a travel opportunity to an unfamiliar destination sometime between the 22nd and the end of next month. Even if you don’t have plans to pack a bag, dedicate some time to expanding your worldview with foreign films or a short-distance expedition.

July ends on a hopeful note with your ruler Jupiter making a sextile to spiritual Neptune. This is just the restoration of faith you need to propel you onto a higher path in August.