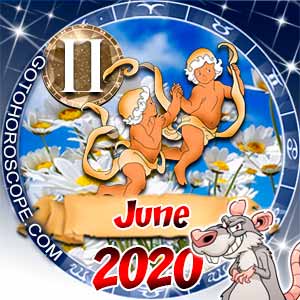 Hedge your bets and prepare for some changes in money this June, Gemini. Two powerful eclipses disrupt your partnerships and your disposable income, showing you where you and your partner’s values really lie. Mid-month, the retrograde of your ruling planet Mercury sends your self-worth under revision. Look for flaws and inconsistencies in your internal value system; you’ll need to restructure if you hope to strengthen your foundation. Power imbalances are revealed this month too, acting as springboard catalysts you can use to improve even the most hidden areas of your life. Indeed, you’ll find the golden opportunities of June in the most unusual of places.

As quirky and unconventional as you are, you’re familiar with being on the outside looking in. Setting the stage for this month, the Jupiter quintile Chiron aspect on the 1st brings the wounds of past exclusions to the surface. You probably feel more rejected than ever, like you just don’t fit in. You might even be hiding your uniqueness behind a mask that allows you to blend in with the crowd.

By not revealing your true self, you’re actually robbing others of any truth you have to offer. Even worse, this façade attracts friends and connections that exacerbate your mistrust of self-proclaimed companions.

The good news is you recognize this pattern quickly thanks to Pallas retrograde in your house of relationships on the 2nd. In fact, you’re empowered to take initiative and change the mainstream values of the groups to which you belong.

When it comes to earning money, you need to take frequent breaks to recharge. From the 3rd onward, asteroid Vesta’s sacred flame flickers in your second house. This calls for dedication in matters of personal finances, inner security, and material possessions.

June 5th sees an extravagant Full Moon lunar eclipse in your seventh house of relationships and love. Unrelated frustration and irritation quickly escalate to unbridled anger thanks to this eclipse’s square to Mars. Likewise, the moon’s opposition to Venus promises squabbles and disharmony. When you fight for attention, you compromise your self-worth and attract the very negativity you’re trying to avoid. The key to handling this tension is to release your exasperation in a wildly creative way that fulfills your adventurous spirit.

A surprising new healing tool is at your disposal on the 10th. Chances are, someone in your social circle has exactly the remedy you need. Because of Uranus’s semi-sextile to Chiron, you’ll need to work past the fear of being denied and ask for the resources you’re after.

Mid-month gets a little rocky as your ruling planet stations retrograde in your second house on the 18th. For the next three weeks, money might be delayed, and a recent major purchase could cause you problems. Right now, you’ll need to do some hard thinking about what’s “worth it” to you.

Do you believe in your own self-worth, Gemini? You’ll be asking yourself that question on the 21st. Coming on the heels of the Sun’s ingress into Cancer, an emotional New Moon solar eclipse forces you to look at your relationship with yourself. This is a new beginning for you that opens a gateway into how you feel about yourself. If you’re in a relationship, you’ll need to strike a balance between your own needs for comfort and security and the counterpart needs of your significant other. It’s time to start fresh with regards to your material values and obligatory attitudes.

As the solar eclipse calls for changes, you might need to confront someone who has been abusing your assets. Conversely, maybe it’s time you settle a debt of your own.

Once Neptune stations retrograde on the 23rd, it’s impossible to pull the wool over your eyes. For better or worse, you’re seeing things clearly – especially in professional settings. Your idealized version of your public image could come crashing down to realign you with what you really stand for.

You won’t let this get you down though. Instead of wallowing in disappointment, you’re ending the month with a powerful activation of your eighth house of sex, death, and taxes. The conjunction between Jupiter and Pluto on the 30th magnetizes you and draws powerful allies to your side. Keep your eyes open for an inheritance or windfall and expect to benefit from other people’s resources.

Mysteries intrigue you now, so you might find an urge to dabble in the occult or the taboo. Your sexual attraction is boosted, and others find it impossible to resist your allure. Watch your step though as there’s a tendency toward manipulation or guilt-trips.

Practicing true intimacy and vulnerability will bring you the fortune you desire this month.

All things considered, June teaches you to merge your mind with others and to share your originality without any pre-conceived notions. When you improve your life out of love for yourself, you’ll exit July with more hidden gems than you know what to do with.