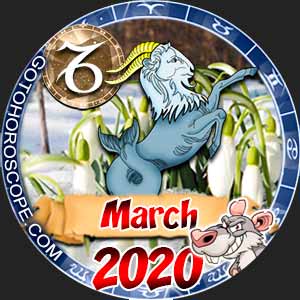 Capricorn, you are a conservative and serious person in general, not really liking to rock the boat or go out on a limb. The month of March will bring a blend of reinforcement to your personal brand of diligence, and a few challenges and opportunities to open you up to new ideas and new skills. This will be a good month to try to learn something new, especially in the world of tech. Your career will essentially be on ice throughout much of the spring, so you can take March to lay in plans for the future. Your finances will remain in fine shape, while the financial hardships of older family members will be an unexpected drain on those around you. Your health will be excellent throughout the month of March, Capricorn. You'll be blessed with calm sleep and pleasant dreams.

The planets will be heavily weighted in the southern end of your chart, Capricorn. This indicates that you should expect much in the way of obstacles when it comes to your professional life. The movement of Mercury through retrograde will add to confusion and misunderstandings at work. Travel for your job should be avoided or put off until Mercury makes the swing into a direct movement on the 9th. Vesta entering Gemini on the 21st bodes well for a prospect you've had your eye on for quite a while. Don't miss the opportunities to plan new ventures at the end of the month.

March, Capricorn, will be an almost unprecedented period of intellectual growth for you. Any skills, or new things in general, that you've been meaning to learn should be pursued with as much vigor and effort as possible. This is particularly true when it comes to things of a technical nature. If you've been meaning to learn how to use a new program or device, this month is your golden chance.

The weight of planetary motion will split evenly between the east and west half of your chart in March, Capricorn. This indicates that you should try to strike a balance between your own needs and the needs of those around you. Don't neglect your friends and neighbors, but don't lose sight of what's happening in your own house. This is going to become key with the ripening of the moon during the last week of the month.

Pay special attention to what's going on in the lives of your older family members during this month. Discord and disease are more likely to appear during the middle of the month, and this will add a financial strain that others in your family have not anticipated. Be sure to keep the lines of face to face communication open so that you can avoid misunderstandings in this area, and to prevent yourself from being taken by surprise. Your parents, aunts, uncles, and grandparents should be focused on more than usual.

Financially, your own house should be in decent shape as the month moves on, Capricorn. Keep up your spending and saving regime, and don't let a few setbacks early in the month discourage you. Venus and Vesta are conspiring to provide you with an unforeseen windfall anytime after the 21st. Play the lottery, keep your eyes peeled, just generally open yourself up to an unexpected gift around this time. Pay special attention to the numbers 3, 14, and 17.

Your health is indicated by the movements of Jupiter and Mars on the 23rd and 30th, respectively. You can expect more of the same, with a marked improvement in your sleep cycles and state of mind. The fog that has followed you throughout much of the winter will lift and you should begin to think and feel more clearly. Expect dreams to become more vivid and even informative. Don't ignore what the universe is attempting to communicate to you as you move through the month of March.

Your focus throughout the month will in many ways be on improving your interior and domestic life. Look for new ways to spruce up your living space. This will lead to ease of mind and a sense of renewal. Keep your head down, Capricorn, and you can expect to exit March in better shape than you entered it. Learn a new skill, help an older family member, lay in plans for your job moving forward, and keep your hands open to catch what the universe will throw at you. This is a sure-fire plan for health and happiness in March.