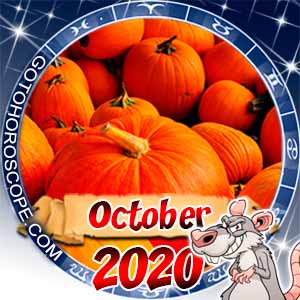 Libra season is going strong into October, bringing a spunky full moon in fiery Aries on the 1st! Before this month even has a chance to introduce itself, we’re approaching today with spontaneity and a bit of impatience. It goes without saying that most of us aren’t doing too much thinking before acting around this time, but working with the full moon’s energy gives us a great opportunity to seize our goals or let go of the ones we no longer want to waste energy on.

Love and affection take on practical connotations in October after Venus enters Virgo on the 2nd. This is a really great time for learning a new skill or knocking out a few chores for a loved one.

This energy is devoted and tuned into all the finer details, but it does tend to make for perfectionist tendencies. Keep in mind that no one enjoys being criticized all the time, and use your discrimination now when it comes to assessing if you’re receiving all you deserve.

Pluto stationed retrograde back in April, so the past five months have been buckling under a necessary inner transformation. In Capricorn, the profound changes Pluto Retrograde highlighted related to our authority and achievements in society. Pluto stations direct, ready to move forward once again, on October 4th, so this is when we should focus on taking everything we’ve learned to project a better public image and accept responsibility for our own power in our lives.

We aren’t quite out of the woods yet, though. Far from it actually. See, Mercury stations retrograde on the 13th in the brooding mysterious sign of Scorpio. In general, this signals a tough cycle ahead wrought with misunderstandings and things just generally going wrong. The retrograde alone signals breakdowns in communication and malfunctioning electronics, but the added energy of Scorpio could amp up the consequences to the catastrophic level.

If you can manage to be gentle with your fellow human beings over the next three weeks, we could all use a little kindness as the planet of communication does its cyclical flip-flop.

A few days later (the 16th to be exact), a New Moon in Libra plants the seeds for diplomacy and balanced cooperation with others. Rather than letting our emotions run the show from behind the curtain, we’re interested in analyzing our feelings and searching for the most logical fashion to express what we mean. Refinement and polishing is the name of the game this lunation.

On the 22nd, Scorpio season arrives as the Sun enters this Pluto-ruled sign. Like all things Pluto and Scorpio, this solar cycle is all about transformation and the power to transmute fear, trauma, or deep wounds to claim the power we used to survive them.

To complicate matters, Mercury touches a second sign sector before October is over. On the 27th, the messenger planet leaves Scorpio for Libra but it brings its retrograde energy all the same. We should all focus on transforming this retrograde energy into an advantage by practicing deep introspection and by revisiting anything we’ve been putting off throughout the year. If you’re not into self-improvement, just take care not to dive into anything new from mid-October forward as Mercury Rx is bound to give you every bit of trouble it can muster.

The astro-gods do give us a bit of a treat on the same day though. Simultaneously with Mercury Rx, Venus enters Libra on the 27th. This is an extra special transit because Venus rules the sign of Libra, empowering the planet of love like never before this year.

I say that, but you shouldn’t take that as a recommendation to start a new relationship or shack up with a stranger. These are both things everyone should avoid under Mercury’s retrograde anyway, but the yearning for partnership with this Venus transit could set any one of us off course.

Last but not least, October ends with a Taurus Full Moon on Halloween. This sounds spooky; however, it’s one of the most magical lunations of the entire year!

Taurus rules our physical plane, and the Full Moon frequently signals a culmination, a peak, or the beginning of the end of something. That means whatever we see illuminated right now will have strong ties to the physical world and the Earth itself. While we’re on the subject, one of the very best ways to celebrate this full moon is by getting outdoors (preferably the wilderness) and focusing on the organic intricacies of life.

Once we all take a step back and really look at where we’re coming from versus where we’re going, we can make plans for what needs to change. We don’t want to commit to any of these alterations until Mercury stations direct, but the more time you let the idea digest, the more ready it will be for you in November.