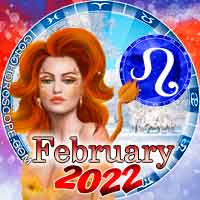 Everyone was very excited for 2022 but then came January, and everything seemed like a bit of a mess. Don't let that discourage you, Leo. These first few months are all about purging some of the negative energy still lingering from the previous year. Though January caught us with the double Venus and Mercury retrograde in your 6th house, February 2022 is most definitely the very last slight stretch before we can have a few months in calm waters.

Yes, you read it right; February 2022 still packs a little bit of drama, but not anything nearly as tense as the preceding month. Now is the time to sit down and tend to the repercussions of the events that unfolded in the not-so-distant past. The good news is that the support to make things happen will definitely be there. So, though it won't be easy, you will have help. Right away, on the 3rd of the month, we have Mercury stationing direct, putting an end to their retrograde cycle. Since this happened in your 6th house of hard labour, health, and subordinate, it's likely that you had to deal with some of the harsher sides of life. Still, now with Mercury gifting you with the intelligence to make a plan of action, you can start working on developing a new routine to get you back on your feet again.

One thing must be said about the 6th house, though. Traditionally this is the house that often points at possible health issues, cuts, or pains to the body. This would most likely only be the case for the Leos born before sunset and who are 17, 29, 41, 53, or 64, but it's important to be a little extra careful around this month with Mars, the planet of cuts and bruises himself transiting through your 6th house. It's time to prioritize your health, get a check-up, and start cutting junk food out of your diet, all things that Mercury can help you plan for. As another mitigating factor, Mars and Mercury are not the only two planets transiting through that house. Venus, the planet of peace and union, will also be there, which can provide you with extra help from feminine figures, especially for Leos born at night. With that said, you may have better luck when approaching feminine doctors or nurses. Moreover, a point of interest this transit could target are bones, teeth, and joints, so stretching regularly and maybe checking up with your dentist could be beneficial. Two dates to watch out for are February 15th, when Mars and Venus both conjoin, and the very last day of the month when Pluto also joins in approaching a triple conjunction.

The Full Moon on the 16th is falling in your 1st house of self-image, body, and spirit. This can be a bit of an emotional time, especially for those of you who are in a relationship as Saturn opposes this lunation in your 7th house of intimate partners. You could expect either your partner or someone dear to you to approach you with a tough yet necessary conversation. Like stated earlier, February 2022 is the month to clear things out, so chances are you already see this coming. While this doesn't necessarily have to be a negative conversation, Saturn's presence implies that it's an interaction that needs to be taken seriously. Considering the house this transit is falling on in your chart, this could be a bit of an overwhelming moment, but don't be afraid to let the emotions flow out of you. It has to happen, and likely for the better. It's also important to note that this could be a little more challenging for Leos, born at night, and it may either involve your father or your partner's father.

Another noteworthy transit closing up the month is the Mercury and Uranus square happening between your 10th and 7th house, keeping up with the theme of relationships. Though, Uranus transiting through your 10th could also bring some career implications into the mix. While squares are usually thought to be challenging aspects, they don't always have to be. They merely instigate action, and given that both Mercury and Uranus are in this together, thoughts, ideas, and innovation could play a significant role in this month's conclusion. Since it comes directly after the Full Moon events, it could be that the conversation you have with your partner yields some creative insights inspiring you to bring some of those themes to a project at work. It could even be that you work with said partner on a work-related task or that your partner enlightens you to go for the career change you've been hesitant to make. Either way, the end of this narrative will be quite exhilarating. Trust the process, and all will be well. Good luck, Leo.