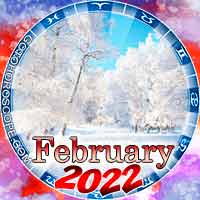 Or read general February 2022 Horoscope for a month ahead

Astrologically speaking, February 2022 will leave many of us with mixed feelings about it. Even though Jupiter in Pisces continues to bless us with expansive spirituality, hope and joy, many other planets and aspects are challenging the blessings the Great Benefic is trying to make rain down on us. This is, of course, no surprise considering the retrogrades of the first month of the year, but I'm sure many of us were rooting for a more positive first-quarter considering how the last year went down.

February is still not all doom and gloom, however. In many ways, it's a month that feels like a portal into something better, though it does feature a doorway with some sharp edges, or at the very least a not so graceful transportation method a la Doctor Who's TARDIS. The secret is to bank on the good things and brush off the bad because, trust me, it won't last very long. This year still has a lot of room for improvement.

Right out of the gate, Mercury will be stationing direct on the 3rd of February 2022, ending its retrograde cycle. This is quite the time for oratory, studies, and business deals. Not only that, its co-presence with its January retrograde-buddy Venus, who is also moving direct at the time, will aid with the resolution of arguments that might've risen out of the double retrograde. On a mundane level, this speaks directly to the ideology disparities that we've seen in the month before, especially in the US, as these Capricorn transits hit really close to the countries Natal Pluto. With that said, Mercury will move much faster than Venus and will join Saturn and the Sun in Aquarius shortly after its station.

On the other hand, Venus is left behind with the not-so-friendly God of War, Mars, and God of the Underworld, Pluto. This could mean that the tensions from the month before still linger for a little while, though not quite as harsh as they were the month before. This is especially true considering that Mars in Capricorn is exalted and is much more prone to behave rather than wreak havoc. We may even see a positive push towards restructuring some governmental and even environmental practices as both planets will trine Uranus in Taurus and conjoining each other shortly after, which could bring some Venusian peace and love to the hotheaded martian. Still, given that Mars, Venus and Pluto will all conjoin towards the end of the month, these changes might feel somewhat extreme to some.

Backtracking a bit, it's also important to note that on the day of the Mercury station, both Saturn and the Sun will conjoin in the Humanitarian sign of Aquarius. This transit has quite a governmental tone to it, as both Saturn and the Sun are related to royalty and politics. This can be quite a good sign for social justice matters. We could even see some significant progress as far as racial, and gender issues are concerned. That's even more true considering that Mercury also does quite well in Aquarius and will stay in the sign for most of the month. This transit screams revolution.

As a cherry on top, the Full Moon in Leo also opposes this whole situation in Aquarius. While this might not look so auspicious at first glance, it can be a classically "bad transit" with positive side effects. Leo sometimes can be a little bit of an egotistical energy, as astrology memes love to pinpoint. Still, the Saturn opposition can help constrain or put limits on such behaviour. We could see kingly figures that don't deserve their status fall from grace in the name of the aforementioned humanitarian causes. This month really is about leaving all retrogrades behind and moving forward.Lastly, continuing with the Mercurial theme, Mercury and Uranus will form a square in Aquarius and Taurus on the 24th. Uranus and Mercury are both planets tied to technological advancements and innovation. This could be a time when we see new revolutionary technologies that seem to come out of nowhere. While the square does carry some tension with it, meaning that not everybody will be happy to hear about these discoveries, whatever happens throughout the month will have long-term repercussions. Because of Uranus' transit through Taurus a sign that is often linked to ideas of food, money, and resources, these advancements could be related to these fields. Something that comes to mind is a cryptocurrency, as it embodies Uranus' challenging technology and Mercury's inclination towards business and trade.

February 2022 is definitely a fast-paced month, not only because it's a few days short, but it's our first movement forward of the year. Expect tension, but know that it's only revolution in disguise.