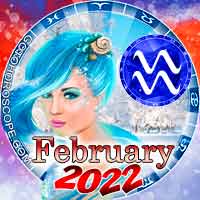 2022 had a rough start, that's for sure. After a sequence of rather turbulent years, being greeted with the double retrograde of Venus and Mercury right away did not make this year feel like it's going to be any different.

That couldn't be farther from the truth.

January and February are merely a lesson on not judging a book by its cover (or maybe the first chapter also). With that said, February 2022 could still be a little shaky, considering some of the tension from January is still being cleared. On the bright side, right as we enter the month on the 3rd, Mercury stations direct, finishing his retrograde cycle, and Venus will be slowly but surely picking up her pace. All of this action is happening in your 12th house, one of the places in a given chart that deals with seclusion, loss, and the spirit realm. You'll notice that this house will continue to play a prominent theme throughout the month as a hefty amount of planets will be transiting through it. This could mean that, especially around Mercury's station, you may need to spend some time alone to process some of what happened in January. This is because, chances are, it was quite the grim month, but as the resilient Aquarian survivor that you are, you just powered through it without giving too much thought to the mental health repercussions of such events. It's time for self-care.

On that same day, another quite important transit will also be happening in your 1st house of self and identity. Both Saturn, the ruler of your sign, and the Sun will conjoin there, generating some exciting results. The energies of these two planets are quite contrasting, as the Sun is hot and vibrant, and Saturn is cold and sluggish. You might find that because of this transit, you'll phase through these different states of being. It's important not to push yourself too much, especially if you're an Aquarius who was born at night. Saturn can be somewhat challenging for night births, especially when it appears in such an important place in your chart, such as the 1st house. It would be wise to take the time to rest and find the light of the Sun through a brief separation from the external world so that you can think on the next course of action that feels the most authentic to you. The year is sure to start picking up after February, so take this period of inactivity as a blessing in disguise. For the Aquarius born during the day, however, you may experience more of the Solar aspects of this transit. You may find that people will look up to you as a source of wisdom around this time. Embrace it, but don't let them suck up too much of your energy. You still need to recharge.

Moving forward, but readdressing the 12th house matters, Venus and Mars will also conjoin in that place from the 15th to the very end of the month when they join Pluto on triple conjunction. This transit can be quite introspective and could urge you to think seriously about your alliances and friends along with enemies and competitors. Especially when Pluto joins in at the end of the month, you may need to make serious choices about who you want to remain in your life, and who you need to distance yourself from in order to maintain a healthy mental balance. Especially since this transit directly relates to the Venus retrograde of the previous month, a transit that is notorious for turning friends into adversaries, formidable yet necessary choices will have to occur. Deep down, you already know who needs to go. Aquarius born during the night might have an easier time with this transit, focusing more on the Venusian aspect of peace and union. If that's the case, you may not even have to cut ties with anyone. They might just depart on their own account.

A day after the initial conjunction, we have a Full Moon happening on your 7th house of relationships. This transit plays on the themes of the 12th house, albeit much more significantly. The 7th is the place of intimate relationships, and so, this lunation could bring light to old aspects of the relationship that are hindering the couple from advancing. This transit is all about setting wrongs right and reestablishing a solid foundation for romance. There's work to be done, but this shouldn't be as challenging as the 12th house transits.

Like aforementioned, February 2022 is a little tense. There's much work to do involving emotions —your and others— that can be a little tricky to navigate. Even still, all of this is happening in the name of progress. The Universe could surely be gentler in the way it's pushing Aquarius to tend to relational issues, but the silver lining is that dealing with everything at once also means a long period of peace comes right after. Good luck, Aquarius.