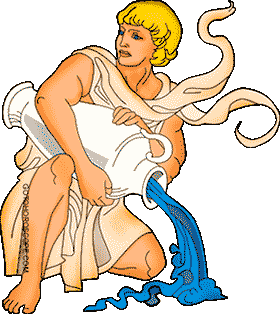 THE Zodiacal Sign of Aquarius commences on January 21st, but for seven days, being overlapped by the "cusp" of the previous sign, it does not come into full power until about January 28th. From this date onward it cannot take its full strength until February 19th and is then for seven days gradually losing its strength on account of becoming overlapped by the "cusp" of the incoming sign Pisces. Those born people who were born in such "cusp" usually take from the qualities of both signs. These natures generally tend to feel very lonely in life. They are over-sensitive and easily wounded in their feelings. Aquarians have a great desire for material gain but are not greedy. They are tireless workers and are willing to work for what they want, and do not demand more than their fair share. They read character instinctively, and for this reason, they "see through" people too easily to be really happy.

People who were born in February are not demonstrative in affection, and in fact feel very deeply.

They are usually high-strung, and their nerves are generally overwrought. This person often loses control and then say or do things that they bitterly regret later.

They are generally very active for the public good, and often give all they have to relieve the distress of others.

They are good thinkers, and are very successful when it comes to debate and argument, and difficult to convince.

They are excellent in business and finance when they apply their minds to such things, but usually, they are more successful to the benefit of others and make more money for other people than for themselves. Such people are seekers of knowledge, rational, open-minded, and gifted with the breadth of vision.

If people born in this sign manage overcame their sensitiveness and developed their will-power, there is no position they would not be able to attain. They are usually successful in some large sphere of action, where they can feel their responsibilities for others. As an idealist, Aquarians would like to see that everybody is happy and their ambition is to do something important and meaningful.

They take a great interest in public meetings, gatherings of people, and public ceremonies. In spite of the fact that such people love theatres and concerts, and like to be where crowds of people congregate, they often feel lonely.

If born with money, these people rarely show who they are. They are inclined to let their opportunities slip, or realize them only when it is too late. If, however, people born in this period belong to the lower order of humanity, they inclined to lose all sense of honor and principle, and are extremely unreliable, tricky in money matters, dishonest, and unscrupulous in gaining what they desire.

As lovers, these people are full of surprises. They simply cannot be happy or fulfilled unless they are free to do as they like. No matter how deeply in love these people may be, they are never willing to sacrifice their autonomy, but they always put honesty ahead of romance.

In general, it is not true that all people who were born in this time are evil people. In fact, those with the Sun in Aquarius are sometimes "one set against many" against great odds or against an institution; for light are at enmity with darkness in the same way that lions are at enmity with hyenas.

Mars is the Aquarius' ruling planet. It makes the people of this sign have an active life, constantly giving them the reserve of energy. That makes them careless, unruly, ambitious and competitive. This sign's place in the horoscope, first, also represents their need to be first throughout life. Aquarius is a very much self-confident sign. Aquarius' symbol, the ram, is an animal which tries to get everything with an impact of the head, and everyone, whoever has dealt with an Aquarius knows that they go directly to their purpose as persistently as the rams.

They will find their more lasting friendships and affections with those born during their own period or between July 21 and August 20-27, and from November 21 to December 20-27; and also from the center of their triangle, September 21 to October 20-27.

People born in this period should have more time to sleep than almost anyone else. They usually overwork their brains and are inclined to suffer from headaches, eye strain and other things concerned with the health of the head. They are also liable to get cuts and wounds in the head, and they usually run from danger. Such people usually demand constant medical attention.

The most harmonious color for them is all shades of red-crimson, rose, and pink, but if they are ill- all shades of blue and violet are most soothing and beneficial to them.

The birth stones for this period are rubies, garnets, and bloodstones.