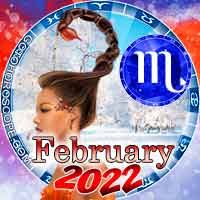 The first month made many of us feel disappointed with the 2022 year which seemed that was going to be much more promising than the one before. If you're one of those who, after January, is expecting the worse of 2022, don't worry. It will get better. This whole ruckus is primarily attributed to the double Venus and Mercury retrograde happening in your 3rd house. This could've made relationships with friends, siblings, and distant relatives a little sour. There's a chance that there's even been some neighbourhood drama. Either way, right at the beginning of February 2022, on the 3rd we come to a conclusion to this retrograde episode as Mercury stations direct and Venus' retrograde cycle is long over, and she starts to pick up speed.

Since the 3rd house is also the house of communication, there's a very strong synergy with Mercury stationing on those first few days. This is the time for you, as a good Scorpio, to take matters into your hands and clear out any of the tension. While doing so may cause more polemic, at least you'll get people thinking. Everyone knows that Scorpios are not afraid to say what needs to be said at a given moment. Knowing that, don't be shy. Even if people get the wrong impression at first, you're sure to get them to leave their close-minded ideas behind, and this is what you want at the end of the day. The Mercury retrograde likely got everyone to be a little avoidant of critical thinking while relying on a more biased emotion-based decision-making process. You, more than anybody, knows that that won't fly.

On that same day, the Sun and Saturn will also be conjoining in your 4th house of home and family. This conjunction has a potent fatherly energy, and it may very well be speaking about your father, especially if you are born during the day and are 27, 39, 51, and 63. This is mainly a favourable transit, but it will significantly depend on your relationship with males and father figures. Whoever this transit is representing is likely about to take charge in the household. If there was indeed any dramatic situation especially involving your siblings —if you have any— this paternal persona is here to appease and put an end to misunderstandings and arguments. While their attitude may be somewhat domineering, this may just be what the situation requires.

Continuing with the 3rd house focus, Mars and Venus will also be conjoining in that same house, starting on the 15th of the month and going all the way to the month's conclusion when they finally join Pluto on a triple conjunction. This transit can be somewhat unstable as Venus and Mars stand for very contrasting topics (love vs war). This could represent a push for the union that's met with some resistance, especially if you are a diurnal Scorpio. While this can represent a fraternal situation, the 3rd house also deals with short trips and the idea of fast-paced movent. If the theme of siblings doesn't apply to you, this transit could also symbolize you or someone in your life wanting to go on a short adventure, though the second party may not be so keen on going anywhere. If that's the most likely scenario for you, it might be best to just go adventuring yourself, or vice versa. Despite the tension inherent to this transit, it's also very likely that the same pressure generates some kind of excitement because one big intersection between these two planets is the idea of pleasure.

Not long after this transit, we have the Full Moon of the month happening in your 10th house. This Lunation keeps up with the wish-washy theme for February 2022. While a Full Moon in Leo is typically an excellent omen of recognition and power, this one may be met with some setbacks. While this doesn't take away from some career success, the opposition of Saturn in your 4th house might make this success hard-earned or slightly delayed. These delays and hurdles are likely are the result of distractions happening within the home. Some of you could even be trying to move at the moment in order to pursue a career opportunity, but the move could move much slower than anticipated. This is even more true for those of you born at night.

The month comes to a close with the Mercury and Uranus square between your 7th and 4th houses. This can actually turn out to be quite the cerebral square generating collaborative ideas between you and people you have an intimate relationship with. These don't necessarily have to be romantic. With that said, don't try to do everything on your own, and use the energies of this transit to do some brainstorming. As long as your motto for this part of the month is "two brains are better than one", there's nothing you can't accomplish.