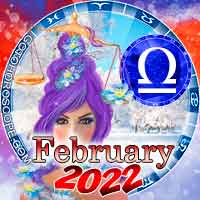 Though 2022 promises to be a much smoother year than 2021 was, the first impressions might've gotten you to think otherwise. With the Venus retrograde happening in Libra's 4th house in the last month, instability in your home might've been a big hurdle to get through. The good news is that February 2022 is the month to clear out all of that nonsense so we can move into March feeling much more positive. This won't come without its own set of challenges, but overall, things are progressing for the better. If you've had any misunderstandings with your parents, roommates, or anyone you live with, for that matter, now will be the time to set things straight and create some clear boundaries. It's time to take advantage of Libra's innate ability to balance and serve as a mediator.

February 2022 starts on a good note as right on the 3rd day of the month, Mercury stations direct in your 4th house, bringing an end to its retrograde cycle. This retrograde might've been quite significant as Venus, the ruler of your sign, was also retrograde in the same place. Now with both planets moving forward, so are the challenges to your home life. This transit lasts for a couple of days, and it will be an excellent opportunity for the Libras born after sunset to take advantage of the significant boost in clarity and communication this transit can bring. If you're 20, 32, 44, 56, or 68, there's even a chance for travel, allowing you to have some self-care time away from domicile conflict. Whether leaving the drama behind is a good decision is a choice you'll have to make alone.

If you do decide to go on an escapade, there's a good chance this trip will be generative. You may feel inspired to work on something creative, or if you went away with a partner, there's even a mild chance of pregnancy for Libras born in the morning. This is mainly attributed to the conjunction of the Sun and Saturn (both planets that symbolize fatherhood) in your 5th house of sex and children. Conversely, you could potentially meet the father of your future children (if that applies, of course). However, with Saturn's finger in the mix, there could be some nuisances coming out of such an event, or things may be slow to progress, especially for those born at night.

Whether you decide to leave home for a bit or not, things will continue to happen as both Mars and Venus conjoin in your 4th house, symbolizing homelife and therefore emphasizing those themes. This conjunction can be somewhat unstable since Mars and Venus stand for contrasting ideas. The former, arguments, separations and conflict, and the latter union, peace and understanding. When applied to roommates and the like, this can symbolize someone moving out. Similarly, if this transit refers to parents and family, someone could be distancing themselves from the family, but that will be met with resistance (likely from a female figure) who tries to appease some of the familial discord. This whole situation can be quite distressing, especially since Pluto joins in on a triple conjunction towards the end of the month. This is not something to be majorly concerned about, but it may inconvenience you. The quicker you tend to the tension, the better.

By now, you probably noticed that February seems like quite a tense time. Though, this is not all the month has in stock. The Full Moon can be somewhat positive as it happens in your 11th house. Traditionally this is the house of good spirit, and it's where you find friends, alliances, hopes, and dreams. While day born Libras might get most of the luck out of this one, given that Saturn opposes this Moon and he's notorious for causing trouble for people born at night, this should still be a good time for making new friends, and most of all, manifesting your most sincere wishes. Still, knowing that Saturn loves slowing down plans, this manifestation might take some time to come to fruition, so don't be discouraged if things don't seem to work right away.

Another quite important transit that could distract you from house drama is the square between Mercury and Uranus on the 24th. These two planets are all about thought and innovation, and given that Mercury is in the aforementioned 5th house of creativity, this can be a time to turn your ideas into something constructive. Uranus could make things a little shaky, especially as it's in your 8th house of other people's resources, meaning that you might be better off working independently than relying on someone else's money or efforts to realize your plans. Still, squares are powerful transits, which could be an ample opportunity for you to learn how to do things on your own. Even if February 2022 might seem like it's trying to go against you, as long as you don't avoid your problems, these challenges will be nothing but growing pains.