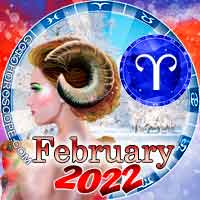 2022 might've started a little weird. As it debuted, it brought us a Venus and Mercury retrograde in January that might've made collaborating with others far less than pleasant. February will be the comedown from this tumultuous start as we head into much more fertile territory. For all the Aries out there, this tension has likely manifested in your career, maybe even through some workplace gossip. This is likely very mild for the Aries born at night, but this might've been quite tense for the diurnal Arians, especially if you're 27, 39, 51, or 53 and have Mars in your 2nd house or 7th house. The good news is that right at the beginning of the month, on February 3rd, Mercury will be stationing direct, bringing an end to its Retrograde phase. This will be the moment to clear out any misunderstandings that might've occurred in the preceding month.

The clearing out of smack talk is made even clearer as the Sun and Saturn conjoin on the same day. This conjunction happening in a fixed air sign is supposed to gift you with the intervention from superiors in your workplace. Saturn's stern fatherly energy is here to set wrongs right, so if you've been frustrated with workplace misunderstandings and upheavals, it would be wise to go straight to those who actually have the power to put a stop to any drama preventing you from continuing to advance and profit. This whole situation could even work out in your favour as both of these prominent planets are transiting through your 11th house of friends, networking, hopes, and aspirations. There's a good chance this initially tense situation could be the beginning of a deeper bond between you and your boss. Though it's important to note that Aries born at night might not end up getting the same luck with their bosses, so it would be wise to keep things quick and professional.

Venus continues to take charge of the month as she approaches conjunction with Mars towards the middle of February 2022. This situation might be quite bittersweet and lasts all the way to the month's conclusion. Since she'll still be in your 10th house of career and public reputation, this could make the month feel very similar to January, full of drama and cutthroat behaviour—coming from you or others. With that said, it will be crucial to be careful with who you share your ideas and secrets with, especially when it comes to work-related matters. This transit is intensified at the end of the month as Pluto, the planet of power, assertion, and control, puts his finger in the mix. While this is likely not the end of the world, it's a good sign to avoid conflict and keep to yourself at least until the month ends.

Enough with the drama, though. February 2022 is not all just bad news. The Full Moon in Leo in your 5th house of joy, entertainment, sensuality, and creativity will be the highlight of an otherwise unstable month. This lunation happens on February 16th, and it promises to bring lofty ideas to fruition. Though you may not necessarily see the conclusion and, therefore, the benefits of your creative endeavours right away. Saturn's opposition to this Moon means hard work. This transit will likely be just the beginning of a long journey. It might be time to make associations with those whose prowess in their craft intimidates you. Being exposed to towering figures will push you past what you're capable of doing right now, and while growing pains are a given, notable projects can come out of this, especially for the Aries born before sunset.

This push for creativity is further emphasized by the square between Uranus and Mercury, both planets linked to thought and innovation. This transit happens about a week after the lunation and could be the push you need in a good direction. While Uranus' involvement in this transit might cause some unexpected disruptions to your finances, they will likely come in the form of an investment or a bold leap of faith in the pursuit of a better environment. This transit is all about figuring out how to get out of tricky situations by using creativity and science.

In the hopes, these predictions don't seem too negative, one thing must be said: difficulty does not equal defeat. February might feel like you're on a battlefield, but since Aries is ruled by Mars, the God of War, this means you're pretty well equipped for the task. The most important thing to remember is to choose your battles wisely. Aries are notorious for being headstrong and brash at times, but that same energy can be channelled toward generating motivation, not animosity. If anyone picks a fight, know it's best to take a step back and watch as your enemies defeat themselves.