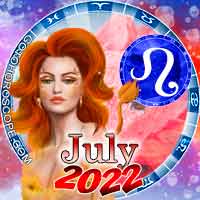 Leos, along with the other fixed signs, are overdue for a break. With Saturn transiting through your 7th house since early 2021, collaborating and engaging with others might've felt dry and laborious at times. The good news is that since Jupiter entered Aries, many of you got a bit of a break while having these tricky interactions softened by a sense of higher wisdom and curiosity. Especially if you were born during the day, this likely manifested a "let them talk and see what happens" attitude. In other words, you've been tired of other people's nonsense, but you're wise enough to let them do what they want as you do the same. If that attitude hasn't grown within you yet, maybe it's time to do so, since, by the end of the month, things are going to get a little hectic, especially with Jupiter getting ready to retrograde out of this supportive position.

Even if the fixed signs like yourself don't get to have as big of a break as the other signs, July is still arguably one of the more positive months through the year. But because it precedes August (which will be quite the month), you're likely to experience a slow build-up of tension that ends with a big bombastic move as soon as the 1st of August. So take this month to get ready, cross all your t's and dot all your i's.

One area, in particular, you want to pay attention to is your career. You had Mars hanging out with Jupiter for most of June in your 9th house of wisdom. Some of this transit also spills into the first week of July, which your probably want to take advantage of. Jupiter and Mars combinations, especially in such a house, can be great for harnessing certainty of when to strike. The best use of the first week of July then would be to thoroughly digest the previous month and to name what was the most significant and boldest move you've taken. Since this is all happening within the context of the 9th house, this could be related to either travel or education, especially if you are 20, 32, 44, 56 or 68.

This is important because once Mars goes into your 10th house on the 5th of July, he will be in a bit of a rough spot, hampering your ability to make major life-changing moves when and how you want it. The deep analysis of your actions while Mars (the planet of activity himself) was in good condition will provide you with valuable information about how to navigate unstable ground.

This month, the Full Moon also keeps up with career-related themes, especially if you have any planets in your 10th house or Midheaven. This can be more of a self-care situation if you don't, but either interpretation is valid.

This transit can manifest through diminished autonomy, which goes hand in hand with what Mars will be doing at the time. This doesn't have to be a reason for distress, though. I mean by this that you're likely to be playing more of a supporting role to somebody else through this Lunation on the 13th of July. This transit will only be challenging if you try and force your way into leadership. Even if that's a skill that may come naturally to you, you'll have to learn to support instead of being supported this time around. In the case that this is more of a health-related transit for you, this could instead ask you to do less, move slower, and perhaps even start practicing some breathwork if you don't do that already.

The New Moon of the 28th of July, on the other hand, has a bit of a different vibe. You'll also want to pay extra attention to this one since, by that time, we'll already be in Leo season, meaning that the New Moon will happen in your very own 1st house or sign.

You probably already noticed that this is really close to the destabilizing August mentioned earlier. Just a few days after this Lunation, we'll have one of the more prominent transits of the year, with relatively strong career implications for you. If you were born during the day, you'll want to make sure you have extra money saved, since Mars overcoming this Lunation could signify fewer shifts at work or even work-related enmities that could get you to consider whether your current workplace really is for you or not. Jupiter will be readying himself to go back into your 8th house during this Lunation as well, which can symbolize a return to older work projects or even loans to allow you to create your own business. For those born during the night, the Martial situation becomes less concerning, but the roles could be reversed, as in you're the boss having to deal with employee unrest.

All in all, July is a bit of a training field for what's to come in August. If this horoscope sounded a bit disconcerting or worrisome, take a step back and have a breather. If it's sunny outside now, you don't want to be sad about a thunderstorm coming next week. Take this as a reason to enjoy July as much as you can and to set up escape routes for the next month if things get unstable. If you are one of those who usually feel these energies coming a lot earlier than they should, use that to your advantage by sitting at the eye of the storm. Challenges are only challenges when we don't accept them. When we do, it's a game. Good luck, Leo!