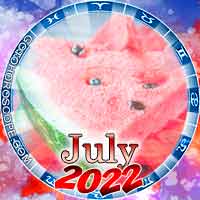 Or read general July 2022 Horoscope for a month ahead

If I had to summarize all of July in one sentence, it would be "The calm before the storm." This is because July is relatively smooth and pleasant for a month that precedes what will be the most astrologically chaotic month of the year.

July has so much to offer because most planets will be in their own signs. This means that there's very little tension, and even the slight stress that might come up every now and then seems to be highly productive. With that in mind, take full advantage of this month to get any significant ideas or ventures started because once August comes around, things can —and most certainly will— get rather turbulent.

To get started, let's first talk about a favourable transit that will be at its tail end just as the month begins: Mars in Aries.

By the 1st of July, Mars' been in his own sign, Aries, for quite the time. It helps that we also have a substantial fortune with him (Jupiter) which promotes good behaviour from the planet of action and drive. We all know that Mars is famed for angry disputes, but Jupiter has a way of softening the God of War with a touch of wisdom. From the 1st to the 5th, Mars will be transiting through the very last degrees of the sign, which is quite the big deal since the one that he will be in next is Taurus, a place where he feels somewhat challenged. Knowing that, if you were planning on engaging in any martial activities like starting a new workout regimen, cooking, signing up for a competition, cosmetic surgery etc., you most likely want to do that before the 5th.

Another planet that moves somewhat quickly into their next sign is Mercury, who will also have strong dignity in Gemini, the symbol of debates, curiosity and speech. It's beneficial that we also have Venus in that same sign, which can promote friendly competition and thought-provoking collaborative projects. Mercury will move on to their next sign on the same day as Mars, so what was said above also applies to this situation. A few mercurial activities you might want to start before the 5th are beginning a study group, bringing an artistic creation to life, beginning to take singing classes, and even going on a nice chatty date, since Venus is also involved in the picture.

Now that you know the best time of the month to get any new enterprise started let's jump right into the New Moon and Full Moon of the month.

Starting with the Capricorn Full Moon on the 13th of July, we keep up with the Mercurial theme.

Mercury will be the closest planet to the Sun during the Full Moon, bringing quite a friendly mood to the lunation. This could be the time for tightening bonds between comrades, with dinner parties and other social events to boost the crew's morale. On the other hand, whenever Mercury is approaching the Sun, they're said to be combust—or burnt by the Sun's heat. Which can represent a sense of getting lost in one's social circle or chosen family. Topping that up with the Moon in Capricorn, these sort of social situations might even feel like work to some of you. There could be a bit of cognitive dissonance between feeling like you should be enjoying the party and feeling the weight of social scrutiny. Either way, this is one of the most pleasant Full Moon's in a while, so I'll take getting tired of partying too much over another global disaster any day.

The New Moon in Leo on the 28th of July has a bit of a different picture, though.

You probably already noticed how this lunation is awfully close to the aforementioned chaotic August. Well, while some of that energy is undoubtedly to start bubbling up around the New Moon, the lunation itself still has some support that shouldn't be overlooked. Jupiter, who will just be getting ready to retrograde back into Pisces, will be on an overcoming trine to the Sun and Moon in Leo.

One way to interpret this planetary soup is that despite this being a New Moon, the real victory will come from re-planting seeds from earlier in the year. If you want to get specific, you might even want to look back at what you were doing in April for a bit of foreshadowing. At around the time of the lunation, you can expect disruptions and restrictions that get you to look back at a practice you dropped around early May. Because we're talking about Jupiter going back into Pisces, this could be as much a spiritual practice as a creative one. It could be that overconfidence got you to zoom through your ideas jumping from project to project, while the real gold was left in the past. With that, get ready to be denied something seemingly great. Chances are, it wasn't that great in the first place. This is simply a way for the Universe to get you to look back and finish the old ideas first.

In conclusion, July is quite a big month. It really is that point in the hero's journey where everything seems fine after a small victory, only for the big antagonist to develop a more fantastic plan.

Because you've already defeated the monsters of the past, this time around, you'll have the skillset to be up for the challenge, but the tricky thing will be to use what you know in a completely new way. An excellent place to start would be to find out what house Taurus corresponds to in your chart since this will be the place this so-called "antagonist" rests. Just remember that you already know what you need to overcome the challenges of the 1st of August at the end of the day, so take July to explore what battle plans you discarded in the preceding months are actually the ones you need to follow through. Take these easy times to relax, but don't forget you'll have to suit up towards the end of the month.