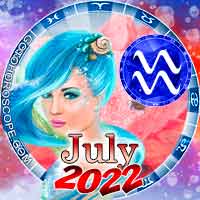 Aquarius is often known as a sign of defiance and revolution. Such a title comes with quite a heavy load of responsibility, especially since you have a whole era named after your sign; the so-called Age of Aquarius. But aside from stereotypes and trendy concepts, your sign actually has gotten quite a heavyweight cast upon your shoulders for the past few years. And you probably have heard this a billion times by now, but Saturn, the planet of hard work and toil, is to blame for such a tedious and long life chapter.

Knowing that at this rate, you've probably heard about Saturn enough, I usually wouldn't even bring the ringed planet up in this horoscope, but this month is actually quite the turning point for that transit. You, along with all the other Saturn signs, are getting to see the light at the end of the tunnel, the end of an odyssey. Now, this is not because Saturn is leaving your 1st house, this won't officially happen until the early 2nd quarter of 2023, but this month the last major transit involving Saturn is about to occur.

Well, I should use this month loosely since it actually happens on the 1st of August, but July really gets the bulk of this transit's build-up. But now that we've laid a foundation to understand what's about to happen... what is it?

The main houses involved in this transit are the 1st, 4th and 7th, which are all pivotal houses in your chart. In oversimplified terms, this is your home, marriage (or some other type of close partnership) and your own identity. But before we get more in-depth into what that can mean in tangible terms, we first have to look at this month's Full Moon as it presents you with valuable insights on how to handle the oncoming situation.

This month, the Full Moon happens on the 13th of July, in your 12th house. This is traditionally known as the place of loss and loneliness, which doesn't sound very exciting but goes deeper than that. Having the Full Moon highlight this house for you shows a need to process any failures or discomfort that might've taken place in the past month. This is also the house where we find our most hidden adversaries, whether they're people, events or something purely mental. The good news is that this Full Moon has a heavy Mercurial influence coming from your 6th house of hard work, which allows you to sit and analyze in painstaking detail all of the things that have occurred recently that have broken your heart. Mercury, as the planet of words and ideas, will help you clear your mind so that you can put what you've been feeling into words. This is for sure not the time for a party, but like mentioned earlier, July is preparing you to close this chapter for good, but closing it doesn't mean it didn't happen. You'll have to undergo the process of acceptance.

Now here's when we get to the Full Moon involving your pivotal houses. Out of the 3 houses listed earlier, the 1st house is probably the one you want to spend the most amount of time with. Even though this lunation is happening in your 7th house of partnerships, no partnership exists without the self (represented by the 1st house). This is so identity-changing because, through this lunation, you'll learn how to engage with others in a completely new way. The way that the 4th house the place of home and foundations factors into this is that this transit will shake you to the core, your sense of "home" and safety is ready to be born anew, but to do that, you'll have to take a step back and spend some time alone before you can go back and start engaging with the world again. This could be a time where you feel misunderstood, almost as though you're ready for a reset, but everyone else keeps dragging you back into your old self. The best thing to do is let them talk and keep doing what you're doing. With that said, this transit can be a little different for those of you who were born during the night. If that's the case, there's a chance that you've, in fact, pushed people back too much, and the new you require not time alone, but to be re-integrated with the people. Having an accurate birth time will help you fine-tune how to navigate these transits.

So far, it might've sounded like July is not the month for you, Aquarius, but in fact, it very much is. Being in the shadows when you can see the light can feel much worse than being surrounded by darkness altogether. Yet, with patience and an eye in the future, you'll be able to turn these present hard moments into steps to recreate your life. Never doubt yourself. It's almost over! Good luck.